Excerpt: Biodesign Out For A Walk, chap 28, “Amazing Faith.”

“His ship survived the storm, and years later he became a priest. He had not forgotten his brush with death and was inspired to write a prayer of thanksgiving, describing his perilous journey. The prayer was actually a poem, which he used as a basis for a sermon. It is unknown who later added the melody. The song “Amazing Grace” has spread world- wide and is considered to be one of the greatest spiritual songs written.”

If I were still participating in the Biodesign experiment, I would play the attached YouTube video featuring Wintley Phipps in a heartbeat. This was even before I learned that he has performed “Negro spirituals” (his words) for 7 US Presidents, Mother Theresa of Calcutta, and Nelson Mandela.

His stunning performance at Carnegie Hall reminded me of the small member of men, whom I have encountered over the past 50 years, who are truly spirit-filled. Those mentioned in Biodesign Out For A Walk were Sasha the potter (Mendocino) “The Muleskinner” (Grand Canyon) and “Moses” on top of Yosemite’s Half Dome. I sincerely hope Henry Thoreau was mistaken when he wrote, “The mass of men lead lives of quiet desperation,” but is rare to see people with sparkling eyes and ebullient personalities.

However my attraction to Rev. Phipps goes beyond his eyes. By his very nature, he demonstrates the immensely important biological process known as biodiversity. There are many biological reasons why people of color have thrived in the equatorial belt where light-skinned people have not. Likewise, there are reasons why light-skinned people have adapted to the cooler northern climes. Understanding the reasons for color diversification renders the argument over racial superiority a divisive “fool’s errand.” Discussions like these added scope and richness to the Biodesign Class.

However, what is extraordinarily intriguing is that Rev.Phipps has taken what has been a stumbling block for millions of black people and turned in into a huge asset. He has not only inspired millions of people with his sermons, humor and grace, he has established the US Dream Academy, that is designed to help at-risk students bridge the gap from poverty to productive citizenship.

Another one of his many talents has been to demonstrate the spiritual power of music, especially Gospel songs. There is a huge amount of anecdotal evidence that music helped black people survive the dual hardships of being enslaved and suffering from chronic poverty. Sadly, some of those racial hardships still remain and we desperately need inspired leaders like him to try to achieve Dr. M.L. King’s unfinished dream: “Free at last.”

Rev. Phipp’s poignant rendition of “Amazing Grace,” conjured up wonderful memories of the hymn/folk-song being sung around a Biodesign evening campfire at Russian Gulch State Park in Mendocino, Ca. Someone requested that we sing the song and Dianna (who was snuggled next to me) whispered in my ear, “I hate that song!” I was surprised, but quietly asked her why? She whispered that she was an unbeliever and found the song phony and irritating. Panic induced paralysis! This was uncharted wilderness for me and I was clueless as to what to do or say. However, after a frightening pause, a mysterious, almost “out-of-body-voice” began to explain the aforementioned story. “Furthermore,” “the voice” went on to say, “Although Amazing Grace has had the extraordinary power to inspire millions of believers, there are others who have not been equally impressed. Some sing the song as a folk song with little spiritual significance and some “devout” non-believers regard the song as not credible and a source of vexation and alienation. “

This opened a discussion about the greater mystery as to why some people feel the presence of a “Higher Power” and some do not. We weren’t able to even remotely resolve the dilemma, however discussing it openly seemed to reduce Dianna’s angst. She stealthily slid her arm between my arm and torso, gave my arm a hug and whispered, “I think we should sing it.”

As we sang the song, the whole group seemed to ascend to a higher level of awareness or perhaps heaven descended to form a wonderful mandorla. Tears trickled down the cheeks of believers as well as non-believers and I realized that I would never sing the song again in a more perfect setting. 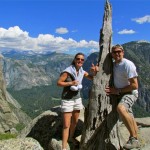 Excerpt: Biodesign Out For A Walk, Chap. 28, “Amazing Faith.”

We were singing out of our songbooks, and, as was the custom, students were invited to make selections that they deemed appropriate. I was quietly strumming my guitar, waiting for the next song selection when someone suggested, “Amazing

Grace.”  Dianna was at my left, and she leaned over and quietly said, “I

“Amazing Grace” may be the quintessential musical mystery and irony. Love it or despise it, its enigmatic blend of melody and lyrics has made it the most widely known song on planet Earth. It has been translated into over 200 languages, a number that is probably too conservative. However, setting language apart, the melody often has a haunting, beguiling and soothing affect on listeners. Interestingly, the effects can be highly magnified when it is played on an oboe, pan flute or bagpipes. The song is played frequently in churches, at weddings, funerals and military memorial services.

Understandably, a song with such universal power and charisma could not exist without  detractors. Agnostics often find it bothersome; Secular humanists and atheists typically reject it more viscerally. The song has been banned, either tacitly or overtly, from public performances in atheist countries and or communities. A growing number of public el/hi, college and universities, in the US have, removed the song from their “politically correct” list of songs that choirs can perform.

However, none of this rhetoric matters a whit to the families and loved ones who are standing in tears next to a casket of a soldier, police officer or fireman who died in the service of his fellow man. As terrible as the pain may be, there is often something deeply comforting when the notes of “Amazing Grace” groan out of a set of bagpipes.

I wept when I watched Doring’s video. Not 0nly because of the beauty and simplicity, but because our children are being taught they are soul-less, random accidents who are not appreciably different from chimpanzees. I don’t recall seeing a chimp fashion a pan flute or play a soul-stirring song. Really sad!