In, The Great Evolution Mystery, Gordon Taylor explains why Darwin’s Theory of evolution does not account for “organs of extreme perfection.” This includes the human eye. Human eyes contain over 100 million cells that all must function in perfect synchrony in order for people to see properly. Although ophthalmologists know much about eyes, it remains a total mystery as to how the light image, focused on the retina, can be converted into biochemical data and transmitted via optic nerves to the brain. How the brain decodes the data and displays it as a visual image is yet another mystery.

Anthropologist Loren Eiseley agrees, however, he expanded the mystery to include the origin of life, which he pointed out Darwin also failed to explain. Eiseley contended that it doesn’t matter what we call the mystery, only that we are aware that it exists. Furthermore, he opined that those who fail to acknowledge “The Mystery” are in danger of ceasing to be fully human.

Albert Einstein agreed, but expressed a more forceful position: “He who can no longer pause to wonder and stand rapt in awe, is as good as dead; his eyes are closed.”

Contemplating frog eyes, and lacking a time or place for the origin of life on Earth, Eiseley alluded to the possibility that life may have come from somewhere across the “pond of space.”

“Yet whenever I see a frog’s eye low in the water warily ogling the shoreward landscape, I always think inconsequentially of those twiddling mechanical eyes that mankind manipulates nightly from a thousand observatories. Someday, with a telescopic lens an acre in extent, we are going to see something not to our liking, some looming shape outside there across the great pond of space. Whenever I catch a frog’s eye I am aware of this, but I do not find it depressing. I stand quite still and try hard not to move or lift a hand since it would only frighten him.  And standing thus it finally comes to me that this is the most enormous extension of vision of which life is capable: the projection of itself into other lives. This is the lonely, magnificent power of humanity. It is far more than any spatial adventure, the supreme epitome of reaching out.”

With a mystery like that, is it not a fool’s errand to bicker over Creation or Evolution?

Like the classic concept of “yin-yang,” both words may reflect a cybernetic mutualism in which one word cannot exist without the other.

This is precisely what Eiseley was suggesting in his classic book, “The Immense Journey.”

If you are feeling a little spiritually deflated, enlarge the frog image and concentrate on it for one full minute and see if you can connect with 400 million years of time and change.

Perhaps it will encourage you to Celebrate the Mystery! 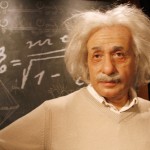 Although my wife is my soulmate, she is not a big fan of Fb.  Therefore, she surprised me by including the Einstein blog in her “Top 5.” She is intrigued that such a brilliant man had to struggle with his faith in the unknowable. She feels that his courageous comments are a timely challenge for June Grads and Dads to “open their eyes,” hopefully avoid spiritual death and overcome their “dull faculties.” Pretty provocative stuff ;o).

I am amazed that he was not blinded by hyper-ego and was intellectually honest enough to admit the limits of science. He was referring to leading a spirit-filled life by actively seeking the source of the “Highest Wisdom,” and most “Radiant Beauty.” 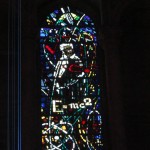 Although he died before the stained glass window in San Francisco’s Grace Cathedral was installed in his memory, I am certain that he would have quietly celebrated the honor. He soared above sectarian bickering and religious dogma and dedicated his life to the search for universal truth, beauty and goodness. Although he became one of the world’s greatest scientists, perhaps his greatest achievement may have been as a deeply compassionate humanitarian.

John Muir described men like these as great visionaries whose thoughts and deeds have moved the world. Indeed, they were major contributors in shaping Western Civilization. 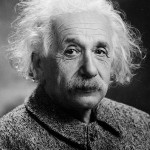 It has been said that we are judged by the company we keep and these men invited Biodesigners to stand on their shoulders to see visions, marvels and wonders that they could not have imagined or experienced on their own. 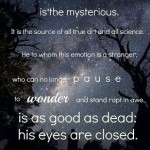 Each year when I presented Einstein’s view on the “Mysterious,” at least one person was offended. “Who is he?” he/she would ask, “to determine who was fit to live or not.” They had been unable to comprehend that he was referring to a “spiritual” death.

When I presented St. Augustine’s original version of “The Big Bang Theory,” the students were understandably amazed by his brilliance. They were astounded that he arrived at his theory 1200 years before Galileo and 1600 years before Edwin Hubble discovered the “Big Bang Theory.” The boys were often so thoroughly baffled that they reacted with frustration, at times even a bit anger. Anger is often a response to things that we cannot comprehend.

In 1929, based on measurements on forty different galaxies, Hubble concluded that the galaxies were expanding away from each another. Einstein favored “The Steady State Theory” and his response was, “The circumstances of an expanding universe irritate me…To admit such possibilities seems senseless.”

Although Einstein reacted angrily at first, he finally conceded to his mathematical error and the evidence for a finite, expanding universe. NASA scientist Robert Jastrow observed: “Einstein realized that if the universe was expanding away from a point, then it had a beginning at that point. If the universe had a beginning then it must have a ‘Beginner’, he surmised. This discovery disturbed Einstein so much that for a time he included an imaginary mathematical ‘cosmological constant’ to his formula. He did this to make the effect of the expanding universe go away. He later stated that this was the biggest error of his entire career.”

Eventually, Einstein grudgingly abandoned his hypothesized force and acknowledged “the necessity for a beginning and the presence of a superior reasoning power.”

However, I suspect that there was something more troubling to the guys. They had attended school for nearly 13 years and had come to rely on books and teachers to provide answers to all of their questions. When I was asked how the universe was created, I responded that I didn’t have a clue. I reminded them that they had to memorize the “law” of conservation of matter/energy, which states that matter can not be created or destroyed. Therefore, either it must have always been here or some mysterious power, being, or process created it. When I told them that, on his deathbed, Einstein smiled and said, “But I still wonder, how can something come from nothing,” they were amused but not satisfied.

The girls, on the other hand, usually found the boys’ behavior puzzling if not humorous. They not only seemed comfortable with the “ultimate enigma,” they seemed to enjoy it. I don’t know if this is due to gender-specific, intuitive or learned behavior, or the result of females being better able to integrate both sides of their cerebral hemispheres.

Perhaps because of their deeply embedded connection to Mother Nature, it was easier and more natural for them to “stand rapt in awe” and translate and communicate the lessons Mother Nature had for them.

Excerpt: BOFAW.    “She replied, “Aw, come on, Tom, can’t you see that EEE-ROW-SHUN made this place? ”The girls burst out laughing, locked arms, and skipped forward. Tom looked at us a little sheepishly and said, ‘Ha-ha, that’s pretty funny; erosion did it.’”