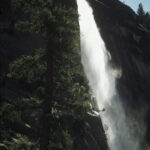 “Heaven knows that John the Baptist was not more eager to get all his fellow sinners into the Jordan than I to baptize all of mine in the beauty of God’s mountains.” – John Muir

No other naturalist, before or after John Muir has reached his lofty status of being able to decipher and communicate the physical, mental and spiritual essences of Yosemite National Park. He could not have known English poet, W.H. Auden, but by writing, “Yosemite is a place to play and a place to pray,” he clearly understood Auden’s premise that “carnival” (the human world of Laughter and Play) is closely related to the world of Worship and Prayer.

Many of the most sacred moments in Biodesign occurred through laughter. Their laughter was of the highest order, showing no signs of being grubby, pornographic, cruel, or mean-spirited. They laughed easily and often, especially at the intimately embarrassing moments that occurred while traveling, hiking and camping together. Their laughter was contagious and healing. 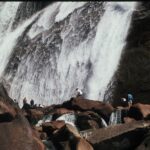 Typically, on warm autumn days, the nearly 5,000 ft. descent from the top of Half Dome to the base camp in Yosemite Valley produced hot and sweaty hikers. A dip in the snow-melt pool beneath Nevada Fall usually offered refreshing relief.   On one of visits the guys were the first to jump in. The icy-cold water produced yelps and gasps. One of them asked his buddy; “Are you squinching?” Whether they had heard the term or not, all the guys immediately understood and burst into boisterous belly-laughter. The girls looked on with puzzled expressions. One of them finally asked, “What is “squinching?” This produced more laughter, and finally, one of the guys said, “You should ask Mr. Young.” 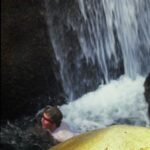 I remembered a conversation with a teacher-colleague of mine who spent a summer in France. When I asked about the highlight of her trip, she said, “I was standing in the Louvre, admiring Michelangelo’s statue of David, and I suddenly burst into rapturous laughter. It occurred to me that after God created Adam, he said, ‘Oops, I almost forgot! You will need two of these and one of these.’ The people around me must have thought I was a nut.” I shared her story and said she might be right.

The event provided a natural opportunity to describe, but not explain, one of nature’s most intriguing mysteries. Human embryonic male testicles originate in the same area that ovaries originate in females. During gestation they are programmed to migrate down and out of the lower abdomen. In cases where this does not happen, the organs will not function properly. Apparently, the normal body temperature of 98.6 degrees is too warm for sperm production. The problem was solved by moving them out of the body, allowing them to cool slightly. They can, however, become overly cold, and when this happens, males “squinch.” The scrotum shrinks and draws the testicles close to, or even up into, the lower abdomen. It was too much information for some of the girls, but most joined the guys in hilarious laughter.

Although the event was uproariously funny, at a deeper level it pointed to the quintessential mystery of how every human being began his/her journey on Planet Earth. Against unfathomable odds of time and space, each one of us began during an extraordinarily mysterious moment when one sperm (out of approximately 300 million) united with one egg (out of about 400) to emerge as a once-in-a-universe zygote. Lewis Thomas, MD, author of “Lives Of A Cell,” suggests that the biomolecular mysteries of forming a zygote are so vast and complex that they may remain forever beyond human comprehension; ergo, the miracle of life.

Just like the theoretical impossibility of any two snowflakes being alike, no two humans will ever be identical. Even so-called identical twins are not identical because they begin to affect each other’s behavior very early in their respective embryonic development (epigenesis). People who get to know identical twins often regard them as only slightly more alike than sisters or brothers.

Twenty years after the waterfall event, the world-famous Dahm triplets rocked the scientific world. They opted to have their ancestry analyzed to confirm their Nordic heritage. The results confirmed their theory but revealed a blockbuster clue. All three have British/Irish genes as well as French/German genes. That was not so surprising, but what was intriguing was that each had a different percentage of the minority genes.

It is doubtless that the original sperm and ovum that produced the triplets contained latent genetic information that dated back thousands of years. It is likely that the mitotic process that produced them involved replicating over 1 billion nucleotides, some of which were not transcribed identically. This means that the “identical triplets” are not perfectly identical. This closely relates to Charles Darwin’s discovery of genetic variation which is a key component of evolution. 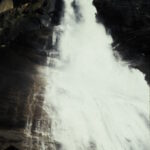 During the evening, after the momentous event, the students were huddled together around the campfire sharing reflections of their day. One of the girls read from her journal, “I have never felt cleaner in my life!”

Little wonder Muir wanted all of his followers to be baptized in Yosemite’s waterfalls.