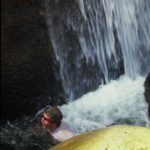 Excerpt: Biodesign Out For A Walk, chap. 26, “Soul Medicine.”

“Many of the most sacred moments in Biodesign occurred through laughter. Their laughter was of the highest order, showing no sign of being grubby, pornographic, cruel, or mean-spirited. They laughed easily and often, especially at the many intimately embarrassing moments incurred while studying, traveling, and camping together. Their laughter was contagious and healing.

On one of the visits to the pool beneath Yosemite’s Nevada Falls, the guys were the first to jump in. The icy-cold water produced yelps and gasps. One of the guys asked his buddy, “Are you squinching?” Whether they had heard the term or not, all the guys immediately understood and burst into laughter. The girls looked on with puzzled expressions. One of them finally asked, “What is “squinching?” This produced more laughter, and finally, one of the guys said, “You should ask Mr. Young.”

I remembered a conversation with a French teacher-colleague of mine who spent a summer in France. When I asked about the highlight of her trip, she said, “I was standing in the Louvre, admiring Michelangelo’s statue of David, and I suddenly burst into rapturous laughter. It occurred to me that after God created Adam, he said, ‘Oops, I almost forgot! You will need two of these and one of these.’ The people around me must have thought I was a nut.” I shared the story and said she might be right.

The event provided a natural opportunity to describe, but not explain, one of nature’s many bizarre mysteries. Embryonic testicles originate in males in the same area that ovaries originate in females. During gestation, they are programmed to migrate down and out of the lower abdomen. In cases where this does not happen, the organs will not function properly. Apparently, the normal body temperature of 98.6 degrees is too warm. The problem was solved by moving them out of the body, allowing them to cool slightly. They can, however, become overly cold, and when this happens, males “squinch”. The scrotum shrinks and draws the testicles close to, or even up into, the lower abdomen. It was too much information for some of the girls, but most joined the guys in laughter.”

Although the event was uproariously funny, at a deeper level it pointed to the quintessential mystery of how every human being began his/her journey on Earth. Against unfathomable odds of time and space in the universe, each of us began during an extraordinarily mysterious moment when one sperm (out of approximately 300 million) united with one egg (out of about 400) to emerge as a once-in-a universe individual.

Just like the theoretical impossibility of any two snowflakes being alike, no two humans will ever be identical. Even so-called identical twins are not identical because they begin to affect each other’s behavior very early in their respective embryonic development. People who get to know identical twins often regard them as only slightly more alike that sisters or brothers.

“Self-actualization” just might be the spiritual correlation of Archimedes’ principle of buoyancy. If so, when people discover how “fearfully and wonderfully made” they are, they too may be inspired to run down the street yelling “Eureka!” “I have found Me!”

This event would have delighted, but probably not totally surprised naturalist Loren Eiseley who wrote, “If there is magic on this planet, it is contained in water.”