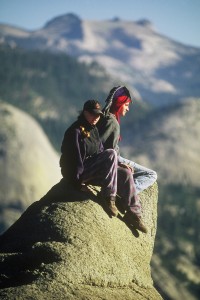 “Mr. Young, is this really important?”

This simple question, asked by a high school student while dissecting a fetal pig, was the genesis for the advanced biology course that became Biodesign.

“Memorizing all the parts of a pig is a lot of work, and I was just wondering if it were really important in the big picture.”

This student and her classmates rightfully and instinctively questioned the validity of memorizing all the parts of a fetal pig, when most of them would likely never have use for that information.  When given the chance to discuss what was important, the students opened up and shared hopes, dreams and desires to learn to be more loving, compassionate people. The seed had been planted.

The Biodesign class was born out of a thought from John Muir:

“I only went for a walk, and finally concluded to stay out ‘til sundown, for going out, I found, was really going in.”

Over the next 24 years, Lowell Young taught Biodesign, which gave high school students the chance to  go into the wilderness and discover the interactions of plants, animals and themselves. The class was dedicated to studying biology by exercising the illimitable freedom of the human mind and probing the mysteries of the physical, mental and spiritual nature of man.

Following the footsteps of John Muir, they slept on the top of Yosemite’s famous Half Dome.  They followed Loren Eiseley and John Wesley Powell to the bottom of Grand Canyon.  Ed Ricketts and John Steinbeck led them into forests and tide pools of California’s beautiful Mendocino coast.  The experiences inside the classroom and outside in the wilderness proved to be a catalyst for learning lessons that would last a lifetime.

700 students.  400 chaperones.  63 trips. Although each class lasted one academic year, the teacher was guided by students for 24 years, and Lowell’s adventure ended when a modern-day Moses mysteriously met him on top of Half Dome.