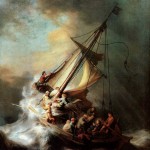 “On an unscripted whim, I had them close their eyes and asked them how many of them had a soul?  Every hand shot up. “Hands down,” I said. “How’d we vote?” someone asked. I answered, “One hundred percent positive. I guess this class has a lot of soul.”

Sweet Jesus, talking
his melancholy madness,
stood up in the boat
and the sea lay down,

silky and sorry,
So everybody was saved
that night.
But you know how it is

when something
different crosses
the threshold — the uncles
mutter together,

the women walk away,
the young brother begins
to sharpen his knife.
Nobody knows what the soul is.

It comes and goes
like the wind over the water —
sometimes, for days,
you don’t think of it.

Maybe, after the sermon,
after the multitude was fed,
one or two of them felt
the soul slip forth

like a tremor of pure sunlight
before exhaustion,
that wants to swallow everything,
gripped their bones and left them

miserable and sleepy,
as they are now, forgetting
how the wind tore at the sails
before he rose and talked to it —

tender and luminous and demanding
as he always was —
a thousand times more frightening
than the killer sea.

Mary Oliver’s poem, “Maybe,” is one of my favorites and one that offers valuable perspective to the Biodesign Class. We considered three themes that she subtly offered and were not concerned with the reference to Jesus. After the “Firestorm” class, I learned how to assure students that just because I was using a quote from Buddha, Rumi, Black Elk, Chief Seattle, Lao Tzu etal, I was not recommending any particular religion or philosophy. Basically, we were searching for the man of Nature and the nature of man, which included his spiritual awareness. Furthermore, “Maybe,” helped illuminate the Biodesign Class better than any other poem.

“Jesus … stood up in the boat and the sea lay down silky and sorry.”

Oliver was referring to a miracle, which is a potential human spiritual gift that is becoming ignored or marginalized in the US. In his book titled, “Miracles,” Eric Metaxas presents a case for how miracles have influenced the evolution of Western Civilization. Furthermore, he noted that as he began to gather information for the book, he discovered that miracles are far more common that he had ever guessed and that most of them did not involve near-death experiences or walking into a “tunnel of light.” He encourages his readers to be on the alert and open to experiencing the mysterious phenomenon. Secular humanists, and pure scientists, deny that miracles occur and use their “sharpened knives” to intellectually attack those who believe they are possible. World-known anthropologist Loren Eiseley wrote in, “The Immense Journey:”  “…I have sought explore, to understand and to enjoy the miracles of this world, both in and out of science.”

After taking 63 groups of curious high school students into “the wilderness,” I have seen more miracles thaN I can number. For those with a “spiritual eye” there is at least one “mini-miracle” recorded in nearly every chapter of “Biodesign Out For A Walk.”

“But you know how it is when something different crosses the threshold…the young brother begins to sharpen his knife.”

The second theme involves the danger of presenting new ideas. Socrates, Galileo and Loren Eiseley were keenly aware of this danger. Socrates was encouraging his students to think freely; Galileo warned that people are not looking for the truth. Socrates was poisoned and Galileo could have been burned at the stake. Loren  Eiseley wrote (“The Immense Journey”): “They distrust, it would seem, all shapes and thoughts but their own. They would bring God into the compass of a shopkeeper’s understanding and confine Him to those limits, lest He proceed to some unimaginable and shocking act—create perhaps, as a casual afterthought, a being more beautiful than man.”

Biodesign proved to be a revolutionary biology class that provoked school authorities (and some local clergy), some of whom thought that I was pretending to be some kind of New-Age guru. More importantly, I thoroughly understood, “Maybe” because some of the new ideas that students shared with me were difficult, sometimes painful to accept. The evolution of the class was heavily influenced by student input.

“Nobody knows what the soul is… until it slips forth like a tremor of pure sunlight.”

The Class of  ’79, and every class that I polled thereafter, regardless of religious or non-religious beliefs, unanimously agreed that each member had a soul. In the early years, I was not prepared to look for “soul” but later realized that there were many stunning examples of the “soul slipping forth.” In fact, it was quite common at Yosemite, Grand Canyon and Mendocino. Surprisingly, it also happened in the classroom. One of them would beam with delight as she/he “saw” a tremor of pure light burst forth.

Although we never discussed it, there may well have been a segue to Jesus, Buddha, Rumi and all other world religious leaders. Anthropologists claim that the first signs that man was becoming faintly aware that he was more than a physical being capable of thought, occurred about 100,000 years ago. This quite possibly could mark the beginning of the human soul. If this is true, the human soul emerged 95,000 years before Hinduism, 94,000 years before Judaism and 98,000 years before Christianity. If so, it is little wonder that, although the students may have been conflicted about their religious beliefs, they were adamant that they had a soul. I wonder if, like other instincts, the “soul” trait was encoded in the human genome and the students were responding quite naturally. This is a stunning possibility and suggests that “as a man thinks, so he becomes” and his new thought patterns may indeed alter his genetic make-up. Scientists will protest that this is an example of disproven Lamarckism, however, they have no clue how behavior can be coded on a DNA molecule. Little wonder Benjamin Hoff wrote in, “The Tao Of Pooh,”  “Instinct is just another word for something we don’t understand.”

If this theory is correct, then “Creation” is still occurring and man has been invited to join the process. This means that the only outstanding question (literally and figuratively); is this process random or does it involve God? This is the quintessential human question and for those who choose to avoid it, Dietrich Bonhoeffer suggested that to not answer the question is an answer.