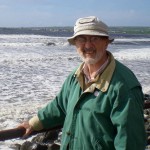 Even though St. Helena is a relatively small town (where everyone knows everyone else’s  business) I suspect that only Tom Burke’s family, a few friends and colleagues knew that, before he became a teacher, he seriously considered entering a Catholic seminary in order to become a priest. Obviously, his children and the nearly 1000 ex-students are grateful for his career reconsideration. However, he did not entirely cast his passion for the sacred aside. He excelled at teaching science, which included the mysteries and wonders of Mother Nature. Tom and John Muir were kindred spirits. In the introduction to “The Wilderness World of John Muir,” Edwin Teal wrote this about Muir:

“Yet he was intensely religious. The forests and mountains formed his temple. His approach to all nature was worshipful. He saw everything evolving yet everything the direct handiwork of God. There was a spiritual and religious exaltation in his experiences with nature.”

For those who knew and loved Tom, there is a striking similarity between Muir’s approach to Nature and his approach to working with students. He regarded each one as a special creation of God and treated him/her accordingly.  This was rarely easy and poignantly described in Pierre Lecomte du Nouy’s classic book, “Human Destiny.”

“When a child begins to speak and to think, one must not be afraid to make his brain and his memory work. The quality of a child’s memory is surprising and is rapidly lost. The coordinating power between his ears and organs of speech is prodigious and rarely persists beyond the age of ten. A child can, without difficulty, learn to speak two or three languages fluently, without an accent, but this becomes almost impossible when he is over ten years old, and at that time requires a great deal of work and effort which, at that age, arouses a contrary reaction, a protestation, thus handicapping the result.”

Tom taught the fifth grade, which has been compared to trying to herd 25 hyperactive kittens in one direction. I am sure there were many moments when even Job’s patience would have been tried, but Tom handled these with a rare combination of patience and understanding.

Tom joined the Biodesign Class of ’85 on their trip to Grand Canyon. He was almost “monk-like” regarding his attire and was satisfied taking his old army boots along. Unfortunately, the soles were worn smooth and the upper 3 miles of the South Kaibab Trail were covered with three feet of ice and snow. The scene might have been funny except he scared us half to death; “step-slip-down on his butt! step-slip-down on his butt.” Several times he skidded to the trail’s edge, only to look down several thousand feet into the great abyss. It was the longest three miles that many of us had ever ‘hiked.”

Mr. Burke had a huge impact on many of his students. Whether they learned important curricular or co-curricular lessons was left up to them, but I know that some of them went on to become teachers with the hopes of following in his foot prints.