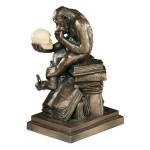 In his own words, “The Autobiography of Charles Darwin:”

“When thus reflecting [‘on the universe, including man’] I feel compelled to look to a First Cause having an intelligent mind in some degree analogous to that of man’ and I deserve to be called a Theist.”

Shame on Richard Dawkins, and other science atheists who deny, obfuscate, pervert or “cherry pick” Darwin’s words. They have sabotaged Darwin’s message to make it conform their soulless world, and what a cold, heartless world it must be. If one of Dawkins’ minions decides to initiate a nuclear war, he could shrug it of as a “random” result of Darwinian “survival of the fittest.” It is staggering to know that an overwhelming number of high school, college/university biology teachers agree with Dawkins.

Secular scientists are quick to point out that human beings and chimpanzees share 97% of the same DNA. While the fossil evidence suggests that humans and chimps evolved from a common ancestor over 5 million years ago, the obvious fact remains that chimps are chimps and humans evolved into the most extraordinary animals on the planet. Evidently that 3% increase led to the world’s greatest artists, poets, sages, musicians and, ironically, even scientists like Dawkins.

Much of Darwin’s theory can be proven in the laboratory and in the field. For 1000s of years, people have used “selective breeding” and “mass selection” as a means to develop more productive and useful plants and animals. However, this does not mean that his theory is complete and flawless. After a discussion with Alfred Wallace, he acknowledged that he failed to explain human “gifts” such as mathematical, musical and artistic genius. These qualities are almost totally absent in chimpanzees.

All of the genetic changes Darwin observed were minor and only rendered the offspring a small advantage of survival. Loren Eiseley quipped; the human brain grew “like a mushroom in the night.” This has equipped man with an indeterminate period of time of mental growth. There is no known biological cause for the rapid expansion of the two human cerebral hemispheres.

Lamarck’s theory of use and disuse is of no value.

The Leakey family, Louis, Mary and Richard verified the increased cranial capacity of modern man, but they did not demonstrate the compelling factor.

Stephen Jay Gould was a big fan of “ontogeny recapitulates phylogeny,” however he failed to show why or how the human embryo (in evolutionary time) suddenly gained the ability to generate a triple-sized brain.

Gould was also a fan of “punctuated equilibrium” which may explain the “fits and spurts of evolution,” but he could not explain the evolution of the human brain.

Pathetically, human geneticist, Richard Dawkins, recently inferred that the human brain evolved out of “nothing.”

The fact of the matter is, by virtue of the laws of chance and probability, the human brain should never have evolved and so it is not surprising that its origin remains a mystery. Considering the universe, with its boggling time/space dimensions, life on Earth is supremely enigmatic. The Earth has been evolving for 4.5 billion years and yielded millions of plant and animal species before man arrived. Darwinian evolution does not need or explain “man.” If all these living forms survived by “instinct,” what need is there for consciousness, values, or free will? If “modern man” evolved 5 million years ago, we have lived on Earth 0.01% of its history and yet arrogant practitioners of Scientism claim that Mystery is irrelevant and that they have all the necessary answers.

Meanwhile, there is a moral and ethical disease that is pandemic in our society and had afflicted scientists as well. It is called “situational ethics” and scientists use it frequently. Lacking any evidence for the origin of the universe, the origin of life, the origin of the first cell or the tripling of the human brain, secular scientists either ignore or obfuscate the issues or make up their own ethics and pander them as truth.