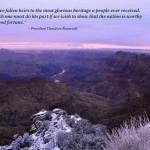 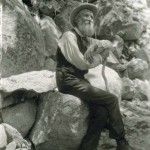 “These temple-destroyers, devotees of ravaging commercialism, seem to have a perfect contempt for Nature, and, instead of lifting their eyes to the God of the mountains, lift them to the Almighty Dollar. Dam Hetch Hetchy! As well dam for water tanks people’s cathedrals and churches, for no holier temple has ever been consecrated by the heart of man.” John Muir

In the 1970s, one of the Biodesign Classes was involved in helping draft a revised use proposal for Yosemite Valley. Data that we reviewed showed that the typical visitor spent2.5 hours in The Valley. They drove into Yosemite (or Curry) Village, bought a hot dog, coke and T-shirt and left. The students recommended reducing the “junk food and doo-dad” image, removing the tennis courts and 9-hole golf course (located at the Ahwahnee Hotel) and barring MCA from paving 400 miles of trails immediately surrounding Yosemite Valley.

I am not an elitist and agree with Woody Guthrie’s line, “this land is your land, this land is my land,” however, as Pogo (and Barbara Moritsch) opined, “we have identified the enemy and he is us!”

We are loving Yosemite to death and it is being done with the full support and approval of the USNPS. Yosemite NP is a huge cash cow and supports nearly 2,000 park rangers, maintenance personnel and clerical workers. Reducing the human impact would result in reducing NPS jobs.  As well as I know the spirit of John Muir, I am not certain of what he would think about this. I do know that he regarded both Yosemite and Hetch Hetchy Valleys as cathedrals and I think it quite likely that he would be disgusted by 20,000 people a day, slurping beer and soda pop and eating greasy pizza while walking through one of the world’s greatest cathedrals.

Is this not similar to the event that happened 2014 years ago when Jesus drove the money changers out of a Jewish temple?

In 1903, President Roosevelt and naturalist John Burroughs joined John Muir at Yosemite. Muir took every advantage to encourage Roosevelt to take action on many nature projects. When Muir “went off” on one of his exaltations of nature, Burroughs chided him by saying, “Good God man, why don’t you get a pulpit for all of your preachin about the virtues of Mother Nature?” Muir’s “preachin” must have impressed Roosevelt.

During his presidency, he was responsible for adding five national parks, 18 national monuments and 150 national forests. Muir’s naturalist evangelism must have rubbed off on Burroughs who later met with Roosevelt at Yellowstone National Park. Both men had a huge influence on Roosevelt who added 150 million square acres to our National Parks.

In his 1913 autobiography, Roosevelt cited the importance of meeting Burroughs and Muir. In the chapter ‘Outdoors and Indoors’; he mentions correspondence with Burroughs, various meetings and a trip that both men made to Yellowstone Park. He also mentions the first trip that he made to Yosemite accompanied by John Muir.  He commented “I shall always be glad that I was in Yosemite with John Muir and in the Yellowstone with John Burroughs”.