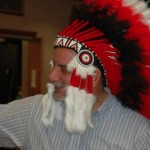 Perhaps the most common mantra I chanted was, “I don’t care what you think, I care deeply that you think.” Contrary to what many people think, an overwhelming amount of education involves massive memorization and minimal original thought. I preferred the Socratic method of teaching, which involved asking students what they thought about reading assignments, and literature cited. If what they thought was their prerogative, what their eventual life-style, career choice or spiritual path (if any) was even more so.

Wayne Neller is a Choctaw Nation/St. Helena Native. He attended local schools and after graduating from St. Helena High School, became an Episcopal priest, ecumenical pastor, substance-abuse counselor and author of several Christian evangelical programs. However, chapter 29 “Wayne” was not featured as a veiled form of evangelism, but as an extraordinary example of what one student experienced. For all I know, he might have become a lawyer, Buddhist monk, Sufi guru, or Native American Shaman. This, however, was his path and may or may not resonate with others.

When I began scribbling down the first stories, the thought that they might end up in book form never entered my mind. The plan was to collect some of the best stories and take them to Kinko’s and print 9 copies, one for each grandchild to read later. By a very strange synchronicity, ex-colleague Linda Wiliamson reentered my life and asked to see my scribblings. Amazingly, she tamed the beast, corrected many errors, reorganized the chapter sequence and produced something that Outskirts Press wanted to publish.

However, when the time came to submit Linda’s carefully edited manuscript, chapter 29, simply titled, Wayne, became problematic. I had major concerns about whether to include it or not. I sent final drafts of the chapter to friends who I knew were believers, non-believers and religious fence sitters. This list included the owner of a bookstore, high school English and humanities teachers and my support team. Shockingly, they were unanimous in their feeling that the chapter should be included. I think I was subconsciously hoping that they would discourage me. My battles to add a spiritual dimension to the Biodesign curriculum predicted that including the chapter would automatically cause the book to be banned from  reading lists at all public high schools, colleges and universities. However, equally concerning, I worried that potential readers would falsely assume that the book was defined by chapter 29, rather than chapter 29 merely being one of 31 chapters.

I thought I made it clear that I was presenting many ways that people connect Nature with spirituality in a non-preferential manner. When readers of Biodesign Out For A Walk have mentioned that they thought the book was written from a Christian perspective, I didn’t k now if they were being critical or complimentary. I pointed out that quotes and references were used from Judaism, Hinduism, Buddhism, Taoism, Atheism, Secular Humanism, Agnosticism, Pantheism, Shamanism, Sufism and Native American Spirituality. All of these ideas were presented as a spiritual smorgasbord with no intention to influence or recruit students for any particular doctrine or “ism.”

“Science and religion are different enterprises and serve different purposes in our lives. Science is a limited domain about discovering facts and religion with other, and perhaps more important, questions such as why we are here and the purpose of the universe, about which science has nothing to say.”

The one area of science that might allow peeks through the wall separating it from religion could be wilderness studies. Great naturalists like Charles Darwin, Alfred Wallace, Gregor Mendel, Louis Agassiz, Henry Thoreau and John Muir saw “God” in many aspects of their work.

In the end, the decision to include the chapter was facilitated by six members of my support team. My wife, my gifted editor and Abraham Maslow, who properly stated that identifying and discussing origins of human spirituality is not tantamount to teaching religion. After walking with John Muir and Loren Eiseley for over 50 years, I can safely say that they would embrace and applaud Wayne’s story.

And finally, Wayne was the most important factor as to whether to include his story or not. He understood well that it might encourage and inspire some readers; he also knew that it could generate anger, ridicule and rejection.

It is remarkable that Wayne heeded Loren Eiseley’s message about the importance of serving others and that he followed John Muir’s model of not worshiping the “Almighty Dollar” and worshiping the “God of all creation.” Wayne’s path was his path and I had nothing more to do with it any more than if he had chosen to be a doctor, lawyer or Indian chief. 😉

In the end, I thought that sharing his story was more important than any possible book sales that I might lose. It was simply the right thing to do. Surprisingly, of all the hundreds of e-mails, Fb comments, messages, letters and notes I have received, not one has been critical or mean-spirited about Wayne’s story.