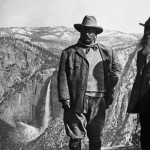 Thursday, 8-25-16 marks the 100th anniversary of the US National Park Service. The NPS has often been described as, “America’s Greatest Idea,” and if this is so, John Muir may arguably be considered “America’s greatest naturalist.”

It is impossible to imagine how the Park Service would have evolved without his vision, passion and dedication. After camping in Yosemite with Muir, Teddy Roosevelt was so profoundly moved that after he returned to Washington, D.C. he set aside an astounding 230 million acres, which became the beginning of the National Forest Service and National Parks Service. Annual visits to all NPS facilities are approaching 300 million, with nearly $30 billion being generated from recreation and “ecotourism.”

In the fall of 1973, under the guidance of principal Dr. William Noble, St. Helena High School initiated a revolutionary advanced biology curriculum that included examining the life, wisdom and spirituality of the legendary Muir. The new class considered contemporary biological and ecological concepts, and following Muir’s lead, students were invited to consider the possibility of their own spirituality.

Not surprisingly, the new class called, “Biodesign,” became a lightning rod, not only drawing criticism from non-believers, but surprisingly from some local Christian clerics. In an ironic disconnect, critics were generally in favor of National Parks, however some of them vehemently objected to references to Muir’s spiritual invocations in a public school. They were not persuaded by the fact that he became widely known as the, “Father of the National Park Service,” a sobriquet not lacking in spiritual overtones. 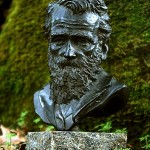 The Biodesign Class lasted 24 years and involved 63 wilderness adventures including trips to Yosemite, Grand Canyon and the Mendocino coast. Following Muir’s guidance, many students exulted in spiritual awakenings that were not necessarily associated with any particular religion.

Several years after I retired, I decided to follow John Muir’s model and attempted the impossible; describing nature-induced epiphanies. The process resulted in a book whose title reflects the essence of Muir: Biodesign Out For A Walk.

After the book was released, I fully expected to be challenged from aforementioned critics, including secular scientists. After all, suggesting that Carl Sagan’s explanation of the origin of life was purely science fiction was tantamount to challenging the humanist’s god.  Surprisingly, all of the reviews and comments I have received have been positive except for one.

The lone critic was an ex-student who informed me that Henry Thoreau was historically far more important than John Muir because of his intellectual superiority and writing style. These are legitimate, arguable issues, however, he went on to describe Muir as lacking an “inquisitive mind.”

Every man’s opinion is his sacred privilege, however, I was intrigued that anyone who had studied John Muir could possibly arrive at that conclusion.

Both men became literary giants who agreed that nature was a pathway for human transcendence. Both engendered thoughts and deeds that influenced world history. Muir emerged from the wilderness like a bearded prophet proclaiming the healing power of Nature.

Thoreau emerged from Walden Pond and described the importance of “civil disobedience” as a way to avoid the “galling harness of society.”

Muir’s legacy led to raising worldwide recognition of the importance of conservation and “eco-spirituality.”

Thoreau inspired millions, and prompted Mahatma Gandhi to lead the ousting of the British Raj government in India and later encouraged Dr. Martin Luther King to peacefully protest the cruel injustice of racism in the US.

After moving to the US, at age eleven, Muir would go to bed at 9:00 PM, sleep until 1:00 AM and get up to carve various inventions. Then he would work from dawn to dusk on the family farm. He attended the University of Wisconsin without graduating, but became a self-taught mechanical engineer. Eventually, he invented over 50 mechanical tools, devices and machines that improved the efficiency in woodworking mills. Interestingly, he refused to take out any patents believing that all of his inventions; “were inspired by God and therefore belonged to all mankind.”

When he nearly blinded one of his eyes, he vowed to “stop studying the works of man and begin to study the works of God.” He began with a 1,000 mile-walk to Florida and planned to follow Baron Von Humboldt’s studies in South America. Unfortunately (or maybe not) he contracted malaria and his doctor advised him to move to the dryer climate of California. His discoveries and descriptions of Yosemite and the Sierra Nevada Mts. became legendary and were widely distributed around the US and even abroad.

Muir founded the Sierra Club, which became a powerful voice in California conservation and was primarily responsible for saving the remaining 5% of the virgin redwood forest. However, his greatest contribution was his vision of the US National Park Service. Today there are over 400 National Parks, reserves and monuments, nearly 7000 state parks in the US and his thesis that parks are necessary for spiritual renewal has gone global.

However, one of his greatest acts of being inquisitive came near the end of his life.  At the age of 72, he began a 40,000-mile, 7-month exploration. When he got to Buenos Aires, Argentina, he took a 1200-mile, round-trip train ride into the Andes Mountains, simply for the privilege of sleeping under an araucaria (monkey-puzzle) tree. He knew that the araucarias were among the oldest seed-bearing plants on Earth and communing with them had been a lifelong dream. 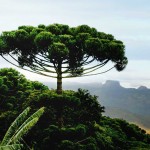 He combined sailing and walking from New York to South America, across the Atlantic Ocean to the Canary Islands; circumnavigated Africa with many stops for exploring; sailed through the Red and Mediterranean Seas and back to New York.

Muir literally and figuratively walked around the world several times, exploring five continents in response to his lifelong quest for knowledge.

Poets claim that “everything is ironic” and in this case, if I had not selected John Muir as a primary mentor, the Biodesign Class and Biodesign Out For A Walk would not have happened and my critic would not have been in a position to question the efficacy of my choice of Muir as the most “inquisitive” and proficient wilderness guide.

This article originally appeared on NapaValleyRegister. Your comments are welcome at young.lowell@gmail.com or connect with me on Facebook.