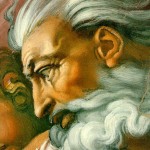 Even though I am not a Biblical scholar, I don’t think it is possible to find single Old Testament reference to God as having a sense of humor. Michelangelo’s dour image of God, painted on the ceiling of the Sistine Chapel, reflects the pre-renaissance pessimism common at that time, however, I fear that countless millions of people still consider his image as  “spiritually correct.” Is it possible that they fail to appreciate that his image was merely designed to accommodate the mental capacity of the unlearned? As a deeply spiritual man, Michelangelo knew that it was humanly impossible to “paint the face of God.” And this is what he may have in common with cartoonist Gary Larson.

However, if God lacks a sense of humor, this begs the question as to where humor came from.

Darwin’s theory of an ever-evolving, “dog-eat-dog world,” dripping in blood, offers few clues. While there are numerous examples of young mammals that seem to enjoy playful, even comical behavior, most zoologists claim that pre-human mammals (and all birds) lack the cerebral cortex tissue necessary to experience humor.

Fast forward to human evolution: there are many legends and stories that indicate that many Native Americans appreciated the importance of humor. Along with healers and medicine men, many tribes appointed “delight makers” who displayed all the talents of medieval court jesters.

The Greeks formalized the role of humor by illuminating the yin-yang relationship of tragedy and comedy (which often included humor).

Circus clown, Emmett Kelly, elevated the art of clowning to unprecedented heights with his creation of “Weary Willie.” And western rodeo shows demonstrated that “rodeo clowns” could employ their skills by distracting angry bulls from attacking fallen riders.

In 1973, Stephen Sondheim wrote the score, “Send In The Clowns,” which was featured in the musical, A Little Night Music.

About the same time, Gary Larson began entertaining the world with his brilliant cartoon strip titled, “The Far Side.” 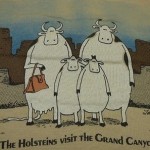 So how could this possibly have any relevance to Grand Canyon?  Of course I am biased, but I think that Larson’s cartoon featuring a panoramic view of Grand Canyon, just may be one of its most profound (albeit silent) descriptions. The single frame shows a wide-angle view from the rim of The Canyon. A couple is sitting in small car, presumably enjoying the view. There is nothing humorous about the frame until you look at the lower right corner. The scene is being lifted up into folds of canvas curtain, revealing a broom, sweeping out dust from behind.

In a single, extraordinarily clever frame, Larson identified an almost universal response to visitors who reach the rim of the Grand Canyon. It is so vast that there are no experiential reference frames to compare it with. The simple truth is that it is a miracle that defies human comprehension: thus the segue to Michelangelo’s “Face of God.”

If ever there was the perfect place to apply Zora Hurston’s adage  “You got to go there to know there,” (Their Eyes Were Watching God) Grand Canyon is that place. Hopefully, avoiding the elitist label, the immensity and magnitude of Grand Canyon cannot be fully appreciated from the rim. One has to “hike there to know there!” Of course, the longer the hike the better, however a walk down to the Colorado River, and at least one night at Phantom Ranch and hike back up will be likely an adventure that most will consider as the greatest hike in their life.

Larson is a genius who combines all the attributes of a Native American “delight maker,” Greek humorist, medieval court jester, contemporary satirist and clown extraordinaire. His Grand Canyon cartoon reveals the futility of trying to describe one of the world’s greatest natural mysteries.

Scientists, sages and naturalists have written endless accounts of Grand Canyon, but I find it pleasing to combine Larson’s image of Grand Canyon and poet Thomas Hardy’s poem “The Last Chrysanthemum:”

I talk as if the thing were born
With sense to work its mind;
Yet it is but one mask of many worn
By the Great Face behind. 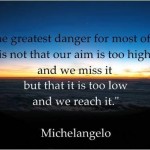 Michelangelo is widely regarded as the most famous artist of the Italian Renaissance. If his goals in life had been lower, the world would never have known his “David” and “Pieta” statues and the Sistine Chapel frescoes. He was a painter, architect and sculptor and dedicated his life to getting as close to the creative power of God as he could. The fact that his works have been enjoyed and celebrated by countless millions of people, for over 500 years, indicates that he may have come pretty close. His lifelong philosophy paralleled that of John Muir, who also set some very lofty goals. After he nearly blinded himself in a factory accident, he vowed to forgo studying the works of man and dedicate his life “studying the works of God.”

We hope 2017 is filled with many physical, mental and spiritual hikes and ends with you standing on higher ground than you are standing on today.