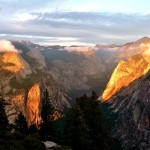 The Biodesign Class of 1978 was only the second class to reach the top of Yosemite’s world-famous Half Dome. They donned their backpacks and labored for 10 miles while gaining nearly 5,000 feet of elevation. The last ½ mile involved climbing a steep series of granite stairs and ascending 400 feet of twin cables up a 45-degree grade. The added weight of the backpacks was challenging for the experienced hikers and was nearly overwhelming for some of the beginners. They had been forewarned that the hike would be a group effort and no one would be left behind. Therefore, when the last hiker topped the brow of Half Dome there was a joyful celebration with lots of tears and hugs.

An orientation session helped them find important landmarks. After setting up a bivouac area, water was heated for trail-food dinners. After dinner the class was treated to an extraordinary spectacle of a blood-red sun dropping below the western horizon. When they turned around to return to the camp area, Mother Nature offered an encore performance of a glorious full moon rising in the east.

After sunset the temperature dropped quickly and students huddled closely together in a circle to share visions and reflections of the day. In addition to a collection of John Muir’s writing, I carried a collection of quotes, aphorisms and adages that were selectively used to enhance discussions. Plato was on our reference list of poets, sages and author’s and I offered the following:

“What if the man could see Beauty Itself, pure,
unalloyed, stripped of mortality and all its
pollution, stains, and vanities, unchanging,
divine…the man becoming, in that communion,
the friend of God, himself immortal;…would
that be a life to disregard?” – Plato

Plato’s words offered a poignant contrast for the students to contemplate. The only blemish on the gorgeous sunset was the layer of smog that could be seen hanging 50 miles away over the San Joaquin Valley. However, at nearly 9,000 feet the sky was nearly perfectly clear. The stars seemed to be competing to see which could be more brilliant. The air was absolutely still and created a profound silence that was truly sublime.

Following a pause in the sharing, Theresa mentioned that she worked as a counselor at a summer camp for kids with impaired hearing. Evidently, the eerie silence was helping her identify with her campers. She mentioned that she had to learn A-S-L (American Sign Language) in order to “speak through my hands.” And then she said, “I heard a lot of stuff about this class, some of it was pretty weird. Maybe now I know why. We have been in class for only a little over a month; we have climbed a mountain together and I can honestly say that I love every one of you like a brother or a sister. A-S-L has a sign for this kind of love and I would like to share it with you.”

She raised her right hand, folded down her middle and ring fingers, leaving her thumb, pointer and pinkie extended. “It’s kind of a sign-language shortcut,” she said. “The pinkie means ‘I’, the thumb and pointer form an ‘L’ and the pinkie and pointer form a “Y.’”

The last day arrived and before we headed home we went out to the meadow for what proved to be an emotional a final circle. The mighty Half Dome loomed one mile above our heads. It was time to say “good bye” to Yosemite and it became a bittersweet parting. Of course, every student had a unique experience, but I think a common source of their emotional catharsis can be traced to the two spiritual wells of Joy and Sorrow.

Their joy came from innumerable, priceless scenic images, memories of stress, pain and growth; trail camaraderie and an experience that Joseph Campbell would have described as, “The Soul’s High Adventure.” Most had seen things that they could never have imagined, and in doing so, discovered things about themselves that they never knew existed.

The sorrow probably came from knowing that they would soon be leaving John Muir’s cathedral and would not be able to explain their experience to family and friends. They were also keenly aware that they would be descending back down to the lowland with its smog, grime, crime and rampant materialism.

As was the case with many Yosemite “final circles,” tears trickled down their cheeks. On one occasion, the tears prompted me to paraphrase Bob Marley’s hit song: https://www.youtube.com/watch?v=TNQ7-NybIvk

One Love / People Get Ready

However, there was often a deeper and more universal cause for their sorrow. On several occasions students wondered why world leaders could not discard their artificial pomp and shallowness and climb a mountain and spend the night. They wondered if world peace could become a bit more plausible if this were to happen?

After all, John Muir predicted nothing less when he wrote:

“The great poets, philosophers, prophets, able men whose thoughts and deeds have moved the world, came down from the mountains.”