According to the latest Pew research poll on religious preference, 4% of the American population self-identify as atheists. Does this mean that the other 96% of the people are on some form of spiritual path? Do they walk in solitude, or have they joined the caravan of seekers that is very long and very old?

“There is a principle which is pure, and placed  in the human mind, which in different places  and ages has had different names. It is, however,  pure and proceeds from God. It is deep and inward, confined to no forms of religion, nor excluded from any, where the heart stands in perfect sincerity.” – John Woolman 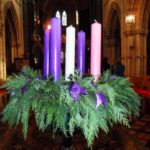 For many traditional Christians, the four weeks of Advent offer a designated period  for reflecting over the history of their spiritual walk, hopefully to help prepare them for the coming year. Some anthropologists theorize that the dawn of mankind’s spiritual quest may have occurred about 100,000 years ago. Evidently they have recovered some primitive stone relics that appear to be offerings to a Higher Spiritual Power.

If this is so, it is a stunning revelation to think that it took 95,000 years for the Hindu religion to emerge; currently 900 million followers.

It took 96,000 years before Moses hiked up Mt. Sinai to record “The Ten Commandments” and help establish Judaism; current world population of about 15 million followers.

It took about 97,400 years for Chinese philosopher Lao Tzu to write the, “Tao Te Ching,” and launch “Taoism” (The Way).  Taoism has no Godhead and is widely regarded as a philosophy dedicated to living in harmony with Nature and fellow humans; current followers number about 20 million.

About the same time, Gautama Buddha established Buddhism. Buddhism also lacks a Godhead and he warned his followers to not make a religion out of his teachings; currently about 300 million followers.

About 1,500 years ago, the Prophet Muhammad emerged and founded the Islamic religion; current population of about 1.8 billion followers.

Meanwhile, there are an estimated 1.4 billion people who are spiritual seekers but remain unaffiliated with a formal creed or religion. These could include our Native American brothers and sisters as well as countless indigenous tribes around the world. 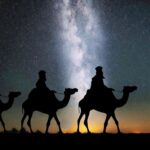 However, last and (arguably) the most important of all; 98,000 years elapsed before the greatest human mystery, wonder and miracle on Earth occurred; the birth of Jesus Christ. The event has resulted in the greatest story ever told and is celebrated by 2.3 billion followers.

The story’s greatness was not overlooked by world-renown anthropologist, Loren Eiseley, who wrote:

“Whether we speak of a God come down to earth or a man inspired toward God and betrayed upon a cross, the dream was great and shook the world like a storm.”

Although the “cross” is probably the most common symbol of Christianity, perhaps the symbolism should; “not be confined to any form of religion, nor excluded from any.” 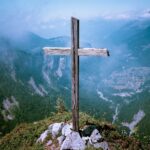 The vertical beam could represent anyone whose base is grounded in the spiritual search for universal truth, beauty and goodness and upper end extends to infinity, eternity and a loving Creator. The horizontal beam could represent the open arms of anyone who embraces the wisdom of Mother Nature, humanity and the quintessential importance of faith, hope and love.

Even though the time frames may not prove to be exact, what is not in doubt is that spirituality has played a huge role in the biological and socio-cultural evolution of mankind. Perhaps, this is what Advent is all about.

Blessings on this wonderful time of year.