Kirlian photography has fascinated me for over 50 years. It was discovered in 1939 by Semyon Kirlian and all these years later, there is little agreement among scientists as to what the images represent or their value.

I don’t know if there is spiritual connection to Kirlian images, but a quick click to https://en.wikipedia.org/wiki/Kirlian_photography yielded three images that seem to resonate with Walt Whitman’s poem, “I Sing The Body Electric.” 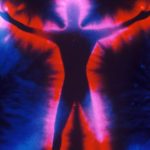 The larger image appears to be a human silhouette with a bright crimson aura. The two smaller images are multicolored human fingertips. (Photo credits: Wikipedia.org)

Whitman’s poem is part of the 1855 edition of Leaves of Grass where he explored the physical body at length. In other poems he has established the interconnectedness of the body and the soul; here he celebrates the primacy of the body and its importance in forging connections between people.

Physiologists have known for a long time that all human thoughts, ideas and actions are enabled by billions of electrochemically-activated neurons. Many scientists, sages and poets (including Whitman) believe that this “energy field” does not stop at the body or cranial limits, but radiates outward into the ether.  Shakespeare opined,

“A prayer is a thought that starts in the heart and passes through the head on its way to heaven.”

It is not uncommon for some mothers and daughters to share nonverbal communication and pick up the phone at the same instant to call each other. Some identical twins have a propensity for similar communication. People of faith commonly reserve time each day for contemplation and prayers offered up to their Creator. There are rare individuals who appear to be gifted with the ability to “light up a room full of people,” deliver an inspiring sermon or motivate others to seek higher levels of consciousness.

“The hero is the one who kindles a great light in the world, who sets up blazing torches in the dark streets of life. The saint is the man who walks through the dark paths of the world, himself a light.”

Although there are doubts regarding Kirlian photography, what is not in doubt is that warm-blooded animals emit heat in the form of infrared radiation. “Sciencing” is the term used to describe this phenomenon and certain fish, frogs, blood-sucking insects and some snakes have this ability. The snake family known as pit vipers, which includes pythons, boas, and rattlesnakes, have a particularly well-developed ability to sense heat in the dark thanks to their infrared vision. They have pits lined with heat sensors along their upper and lower jaws.

Although humans generally experience infrared radiation as warmth, there is increasing evidence that some people have the ability to actually see infrared radiation in the form of auras. I have no idea whether this is a legitimate form of parapsychological phenomenon, however, once when I was leading a discussion from the front of the biology lab, a very perceptive girl shouted out, “Mr. Young, you are surrounded by a bright red aura!” I had no idea what it meant.

Robert Burns, another great poet wrote; “To see ourselves as others see us…” Although most people will not likely see Kirlian images, infrared radiation (or auras) most have the gift of being able to “read” each other’s joy/sorrow, anxiety/peace, anger/frustration and a plethora of human emotions and spiritual phenomena.

The whole-body Kirlian image seems to support Whitman’s poem and may be related to what the student saw surrounding me. However, the two smaller images are intriguingly labeled male and female fingertip. Is it possible that gender is also projected in human energy fields? Is this part of the mystery of what generates “chemistry” between people?

Perhaps this is what movie producer/director Steven Spielberg had in mind when he created, E.T. the Extra-Terrestrial, a 1982 science fiction film. The quintessential moment occurred when Elliot and “E-T” cautiously extend index fingers for an electrifying finger-tip-touch.

Although the practical value of Kirlian images may remain obscure, perhaps their value is supporting Pierre Chardin’s contention that humans are spiritual beings. As such, it has been shown that without physical, mental and or spiritual touching the human soul withers and the body follows.

For this old spirit-warrior, it is sad to know that because fewer and fewer children are attending Sunday school, they will not experience the joy of singing:

“This Little Light of Mine, I’m going to let it shine.”

It is also tragic to note that in an increasingly secularized and materialistic society, spirituality is conversely being ignored or dumbed-down and more and more people will spend their entire life not realizing the potential power of their unique energy field.

In a beautiful synchronicity, what began as a whimsy about Kirlian photography, led me to join Walt Whitman in his exuberant celebration:

“I Sing The Body Electric!”