Excerpt: “The Soul Of The World,” by Phil Cousineau/Eric Lawton

“If my soul could get away from this so-called prison, be granted all the attributes generally bestowed on spirits, my first ramble on spirit-wings would not be among the volcanoes of the moon. Nor should I follow the sunbeams to their sources in the sun. I should hover about the beauty of our own good star… my first journeys would be into the inner substance of flowers, and among the folds and mazes of Yosemite’s falls. How grand to move about in the very tissue of falling columns, and in the very birthplace of their heavenly harmonies, looking outward as from windows of ever-varying transparency and staining.” – John Muir 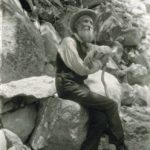 “The soul is the name for the unifying principle, power, or energy that is at the center of our being. To be in touch with soul means going back to the sacred source, the site of life-releasing energy, the activating force of life, the god-grounds; to venture forth and confront the world in all its marvelous and terrifying forces, to make sacred our hours here; to learn to pay such supreme attention to the world that eternity blazes into time with our holy longing. Soul-making, this.” – The Soul Of The World

I suspect that every Nature lover would enjoy having a copy of “The Soul Of The World” in his/her “Nature/Spirituality” library. A used copy, in good condition, can be purchased for merely $5.00 @ Amazon Books:

The book is a veritable cornucopia of philosophies that resonate with the essence of Muir’s life and legacy—a treasure trove of gems of Nature’s wonder and wisdom, which became a primary reference in the Biodesign curriculum. We often began class with a selection from one of over 60 of the world’s great naturalists, including John Muir. 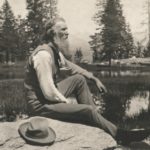 However, Muir did not discover the genre of “eco-spirituality.” Anthropologists claim that the first dim inklings of human spirituality appeared about 100,000 years ago. The Holy Bible includes “The Book Of Psalms,” which is rife with examples of the interrelationships between Nature—God and the human spirit. The earliest Psalm was probably written circa 1400 BC, however, nearly every religion of the world includes similar examples. Some Native American tribes have orally passed down eco-spiritual stories, legends and wisdom for thousands of years.

What Muir did, however, was to share wisdom, prophetic prowess and exultant descriptions gained from his experiences in the wilderness. All of these have made eco-spirituality more relevant in an increasingly materialistic world. He has inspired and encouraged millions of people to become proactive in soul-stretching exercises. 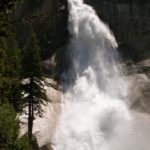 Following Muir’s advice into the pool beneath Yosemite’s Nevada Fall was not my idea. Like many of the creative ideas that became part of the Biodesign experience, a student posed, “If that was the first place Muir would travel on spirit wings, should we not follow his cue?” After their Muir-esque “baptism” many students expressed utter frustration with the lack of descriptive words and concluded that the experience was “transcending.” 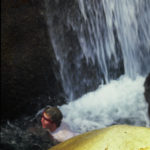 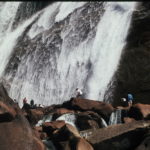