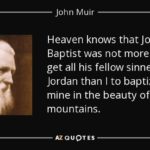 After nearly blinding one eye in an industrial accident, John Muir declared:

This was primarily accomplished in Yosemite and the Sierra Nevada. He launched himself on a self-imposed mission to probe the edges of his humanity and spirituality. Muir not only thrived at seeking transcendental experiences, he enjoyed urging others to seek their respective “edges”where he could give them a gentle push. 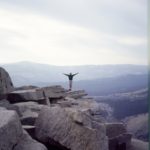 100 years before hang glider pilots began launching off of Glacier Point, Muir was urging anyone he could to climb any mountain peak and test his/her spirit wings. I know about this because 50 years ago he called me to the top of Half Dome and gave me a gentle push. My maiden flight was exhilarating and inspired me to lead 24 groups of high school biology students to the top of Half Dome to test their spirit wings. Typically, they were thrilled and like Muir, saw visions, marvels and wonders that defied human description.