“And where better to grasp in one panoramic sweep the reality of time and change but on the rim of the Grand Canyon, the world’s greatest geological gash?” – “The Thread Of Life,” by Roger Lewin. 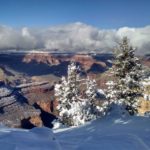 GRAND CANYON is also, arguably, the greatest page of biological history and therefore the greatest biological “laboratory” on planet Earth. After reading the adventures of John Muir in the Grand Canyon in our advanced biology class “Sean” commented, “obviously, we ‘have to go there to know there’.” I eagerly agreed, but replied that the financial and logistical limitations of flying 30 high school biology students 1100 miles to Grand Canyon would be insurmountable. However, Muir and Sean planted a seed and through an amazing series of synchronicities, the next year’s Class flew to Grand Canyon on a glorious, 6-day trip with Muir as our guide. Not only that, 14 more successive classes had the extreme privilege of hiking to the bottom of “The Incomparable Canyon” and spending two nights at Phantom Ranch. 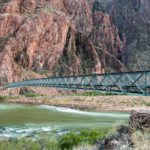 John Muir was his own biggest critic. When he muttered, “These dead bony words rattle in one’s teeth… I can’t get a reasonably likeable picture off my hands…” he was lamenting the fact that spiritual events and awareness cannot be translated into spoken or written words.

He was probably referring to Yosemite, however if he were referring to Grand Canyon his task would have become exponentially more difficult.

Therefore it should not be surprising that perhaps his most cogent assessment of Grand Canyon involved silence rather than words.

“I have observed scenery-hunters of all sorts getting first views of yosemities, glaciers, White Mountain ranges, etc. Mixed with the enthusiasm, which such scenery naturally excites, there is often weak gushing, and many splutter aloud like little waterfalls. Here, for a few moments at least, there is silence, and all are in dead earnest, as if awed and hushed by a earthquake.”

Muir was aware that as magnificent as Yosemite Valley was it was typically emotionally manageable. Visitors were prone to engage in exultant chatter, each eager to share what she/he was experiencing. This kind of behavior is practically non-existent on the rim of the Grand Canyon. As visitors approach the rim, idle chatter wanes until nearly all standing on the brink of the massive chasm, stand in stunned silence. When they turn to leave, many probably agree with the poet who penned;

“The only thing God left out of the Grand Canyon was the words to describe it.”

Unlike Dorothy facing the curtain hiding The Great Oz, there is no curtain blocking the view and visitors are invited to be swallowed up in the Great Mystery.

One year, one of the better writers in The Class, missed the essay due-date and tearfully suggested that I should give her a failing grade. She mentioned that she had made numerous attempts, but the experience was too overwhelming to process. I assured her that I was not interested in failing her and that she should press on.

Four days later she arrived before school looking exhausted, but with a radiant smile. She described bolting out of bed at 1:00 AM and writing for six uninterrupted hours.

Her first draft was beautifully organized, nearly letter-perfect and needed only a few minor changes. When she presented her paper she described walking on The Canyon floor and feeling intensely claustrophobic as if the walls were pressing in on her. When she passed an Anasazi ruin she felt a deep sense of foreboding and that she did not belong there.

Intriguingly, her Canyon experience proved to be sharply antithetical to her earlier Half Dome experience. It’s little wonder that she was perplexed. Muir would have loved the dichotomy and Carl Sandburg presaged her confusion. While watching a sunset over Grand Canyon, he mused:

‘There goes God with an army of banners;
who is God and why; who am I and why?
He told himself, This may be
something else than what I
see when I look—how do I know?
For each man sees himself
in the Grand Canyon,
each one makes his own Canyon
before he comes, each one brings
and carries away his own Canyon—
Who knows? And how do I know? 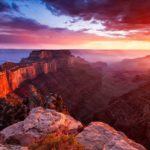 “Sean” was correct. We had to “go there to know there,” however, in the case of Grand Canyon, going there does not necessarily mean knowing there. When tourists read the informational plaque that states that the Vishnu Schist rock formation at the bottom is 1.8 thousand-million years old, most brains flash; “Warning! Data-entry-overload! Try again.”

Many of the students agreed with Muir; the most logical response to The Canyon is silence.

When they were composing their post-Canyon-essays, it was common for them to use “Jonah-esque” metaphors involving being ingested by some mysterious being, power, or process and then being egested on the third day as transformed beings.

As for me, I felt like Melville’s “Ishmael” and was supremely blessed to have been a witness for 15 years and see Grand Canyon through the eyes of over 400 very bright, curious and impressionable students. Certainly, none of this would likely have occurred without John Muir and my student/teacher “Sean.” I owe them both a huge spiritual debt of gratitude.