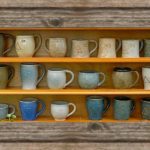 We were recently privileged to attend the 40th birthday celebration of Eric Empting (Biodesign ’97). During the joyous event, classmate Ahren Trumble sidled up to me and mentioned that he had lost his “Sasha Mug” and wondered if I possibly had a replacement. I assured him that I would check. He mentioned that the exact year was not critical, he just missed having a Sasha Mug.

For many years, we had a complete set of the 19 years of mugs that Sasha had so lovingly crafted for over 500 students. I was blessed beyond belief to have a whole set. However, several years ago, another student contacted me about her missing mug so the set was destined to be separated. In a splendid coincidence, I just happened to have one 1997 mug left for Ahren.

This a good thing, because it prompted me to announce that if there are other ex-Biodesigners who have lost or broken their mugs, they are welcome to PM me and maybe I will still have the right year. If not, they may be content with another year.

Sasha passed about 15 years ago, but his legacy of love and compassion still resonates in his pottery that is scattered possibly around the world. I still occasionally hear from students and or chaperones who pay silent tribute to the memory of Sasha every morning with their mug filled with coffee, tea or cocoa.

It was such an awesome privilege to sit at the master’s wheel and watch his mysterious creations appear before our eyes. 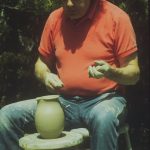 As Eric and I chatted, he indicated that he did not feel worthy of being in the Biodesign Class. Furthermore he felt that he did not deserve being quoted in “Biodesign Out For A Walk.” I laughed and indicated that I too did not feel worthy of being in the Class and was intellectually uncomfortable being called “the teacher.” I remain convinced that the students were far more important in creating the Biodesign experience than I was.   Later, it occurred to me that John Muir did not feel worthy of spending so many splendid hours in Yosemite. Evidently, Muir’s feeling was contagious because Eric’s words of wisdom perfectly captured the spirit of Biodesign.

Except: Biodesign Out For A Walk.

Thirty years after I first stood in the shadow of Half Dome, I was standing in a circle of students for the last time. As I gazed up at my altar in the sky, I offered a prayer of thanksgiving:

“When I think of all the things that could have gone wrong, but didn’t, I am amazed.”

In a perfectly timed antiphon, Eric offered; “When I think of all the things that could have gone right and did, I am amazed.”

Sasha would also have agreed with Eric. Typically, every potter has a logo that he/she imprints on the underside of each piece of pottery. Because of possible overly religious connotations, I only described the symbolism of Sasha’s logo when asked by students. The imprint is the wing of a dove, which Sasha felt symbolized, for some quintessential mystery, the spirit of God descending on him and inspired all of his creations. If this is true, perhaps it is little wonder that many of the ex-Biodesign students and chaperones still regard their mugs with such reverence.