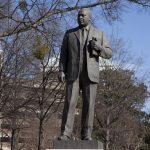 It was not my intention to enter the current political quagmire by sharing the disturbingly frank video narrated by Talif Starks. He piqued my interest by suggesting that a major contributing factor exacerbating racism is our collective failure to understand the importance of biodiversity. My interest is biological and not political and deals with the fact that without biological diversity, life on Earth would have ceased or remained at the cellular level. Ergo: Humans could not have evolved without this natural phenomenon.

Excerpt: Biodesign Out For A Walk. Chap. 21, “The Land of Pygmies and Giants”:

In the late 1960s, the 440-yard relay team that I was coaching qualified for the California state track meet. We traveled to Los Angeles for the competition and qualified for the semifinal race. Twelve teams entered, we finished eleventh, with one team being disqualified. We had the dubious honor of being the fastest “all-white” team in the state. Our guys were not bitter or envious, but proud of what they had accomplished. They even joked about being “smoked,” and regarded their competitors with great respect. They felt that black sprinters were in a different league than white athletes. This would later be supported by the fact that the last white sprinter to represent the United States Olympic Track Team was 50 years ago, which is when black athletes were first recruited to compete at the college level. Since then, over 90 percent of the Olympic medals in track and field events have been won by black athletes, even though they represent only 13 percent of the United States population.

Based on my biological work, this all seemed quite logical; however, it was neither logical nor tolerable for others. Whenever stories and examples like this were used, I received grief from colleagues, administrators, even family and friends, who thought that I was a racist, bigot, or an insensitive, white, male chauvinist. This was disturbing and confusing, and so I began to explore the origin of the conflicting viewpoints. Whenever I chanted my mantra, “there’s no such thing as biological equality,” I could expect to get flack from one of three sources.

The first group was defending the honor of two American political giants, and it involved five simple words. Thomas Jefferson used them in the Declaration of Independence, and Abraham Lincoln used them is his Gettysburg Address:

“All Men Are Created Equal.”

If Uncle Thomas and Honest Abe said this, it must be so. So where does a lowly biology teacher get off by saying something different? I tried to explain that these men were speaking in a political context, which I vigorously supported; however, the biological model was quite the opposite.

Today, “progressives” will watch National Basketball Association basketball teams which, in many cases, are 90 percent black, and tell you in forceful terms that blacks do not have special talents. What is biologically disturbing about this is that black athletes cannot celebrate their gifted talent lest they be labeled as racist. When one of professional basketball’s greatest white players said, “White men can’t jump,” he was branded as a racist, but not by basketball players. His black teammates laughed.