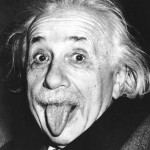 “Whoever undertakes to set himself up as a judge of Truth and Knowledge is shipwrecked by the laughter of the gods.” – Albert Einstein

There are a growing number of practitioners of “scientism” who become exercised when their critics suggest that science may have some wrong conclusions. Paraphrasing Einstein’s logic, all scientists have been wrong on some issues or else they would have become a god.

Ptolemy, the Greek mathematician/astronomer, proposed a geocentric model for our solar system that lasted for 1400 years. Imagine that! For 1400 years, scientists and scholars walked around thinking that they knew the “truth” about the solar system. Ironically, history has repeated itself, as many scientists think that their thoughts are the center of the universe.

Lamarck was wrong about his theory of “use and disuse” and that acquired traits were passed on to offspring. Scientists of that time believed that mice mysteriously emerged from piles of rags and worms spontaneously grew in mud puddles.

Einstein was wrong about the “Steady State” theory and admitted that he falsified some data to favor his conclusions. Later, he sorrowfully acknowledged that it was the greatest mistake in his career.

In his autobiography, Charles Darwin admitted that his theory of evolution could not explain the origin of life or the evolution of humans. This confession is conveniently ignored by an overwhelming majority of high school and university biology teachers.

Carl Sagan’s description of how the first cells were formed (“COSMOS”) is pure fantasy, but is still being taught to millions of US students.

“One of the great unresolved paradoxes of science involves consciousness, free will and values, three long-standing thorns in the hide of science. Materialist science couldn’t cope with any of them, even in principle. It’s not just that they’re difficult. They’re in direct conflict with basic models. Science has had to renounce them—to deny their existence or to say that they are beyond the domain of science.”

In a recent debate on evolution, Richard Dawkins became one of Einstein’s fools as he tried to describe how evolution came from “NOTHING.” When the audience laughed, he looked puzzled and asked, “What’s so funny about that?” What he failed to grasp was that the people, who he regarded as intellectually inferior, used his own words to deduce that he was inferring that his brain must have evolved out of nothing. Little wonder they could not contain their laughter.

In his book, “The Great Design,” Stephen Hawking claims that the universe is so complex that it made itself out of “nothing,” which has rendered God obsolete. Either Hawking is wrong or the fundamental laws of physics (matter/energy can neither be created nor destroyed) are wrong.

There is nothing wrong with making errors during scientific research. In fact, the entire process of the scientific method depends on testing hypotheses to see if they are flawed. However, science becomes dangerously flawed when a “scientist undertakes to set himself up as a judge of Truth and Knowledge [and] is shipwrecked by the laughter of the gods.”

There are many who think that Einstein’s contribution to society, as a humanitarian was more valuable than his work as a scientist. If this is so, then it is not surprising that his legendary last words were, “I still wonder how something could come from nothing?”.

Assuming that we don’t destroy ourselves first, what current scientific knowledge that we believe is factual, will people in 100 years laugh about?