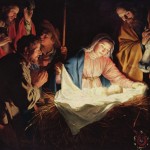 Although there is some doubt as to the author of the lyrics for “Jesus Christ The Apple Tree,” many musicologists have suggested that they were inspired by the Biblical book; “Song of Solomon,” 2:3:

“As the apple tree among the trees of the wood,
so is my beloved among the sons.
I sat down under his shadow with great delight,
and his fruit was sweet to my taste.”

Although the authorship of the lyrics may be in doubt, Elizabeth Posten is credited with the most popular melody version. However, the beauty, mystery and wonder of the hymn may be highly influenced by the arrangement (instrumentation) and where and how it is performed.

Understandably, there are many inspiring versions that have been sung in churches and cathedrals, however, my very favorite was produced by Thomas Moore in a CD titled:  “The Soul of Christmas: a Celtic Music Celebration with Thomas Moore.” https://www.youtube.com/watch?v=8pKdbstX9PE

Organ music has its place, however, the combination of Celtic instruments and the beautiful voices of Susan McKeown and Nikki Matheson produce a deep sense of rural spirituality that conjures up visions of the Irish, Scottish and English countryside. Additionally, the mystery, wonder and poignancy are intensified when we appreciate the darkness out of which the song emerged.

The Celts were people in Iron Age and Medieval Europe who spoke Celtic languages and had cultural similarities.

In the 5th century BC Herodotus referred to Keltoi living around the head of the Danube and also in the far west of Europe. In the first century BC Julius Caesar reported that the people known to the Romans as Gauls (Galli) called themselves Celts, which suggests that even if the name Keltoi was bestowed by the Greeks, it had been adopted to some extent as a collective name by the tribes of Gaul. The Celtic ethos included severing the heads of enemies, a practice that Roman soldiers regarded as barbaric. [Some info adapted from Wikipedia]

Understandably, without the guarantee of food that modern agriculture has accorded billions of people, the Celts lived close to the earth and relied on the capricious whim of 100s of deities. They also believed in animism, which suggested that all forms of life possess a soul. The Druids were the educated sect of Celts and were responsible for religious ceremonies. This included the practice of human sacrifice which the Greeks and Romans also described as barbaric.

Modern Christmas celebrations in the US are often a mélange of customs and beliefs that range from frivolous to deeply sacred. However few people know that the practice of couples kissing under the mistletoe was derived from the Druid practice of all the men kissing the most beautiful female virgin of a village, under an oak tree with mistletoe, before she was burned as a sacrifice to the “god of the harvest.” Little wonder that practices like these are now considered pagan.

The birth of Christ radically changed various religious and ethnic beliefs and practices. This spiritual awakening, and subsequent evolution, may not have been more dramatic than within the Celtic society. As more and more Celts embraced Christ’s message of “peace on Earth, good will toward men,” the Celts became far less barbaric and far more compassionate. However, they did not give up their deep love of nature or connection to the earth.

Perhaps, one of the most beautiful examples of them blending their past with their new knowledge is the Celtic version of, Jesus Christ The Apple Tree.

For over 2,000 years, Christ’s life, light and legacy have been rejected, ridiculed,  scorned and scoffed at, however, the nearly 3 billion, self-confessed sinners, still try to follow His example and for them, Christmas Day is the most wondrous and sacred birthday celebration of the year.