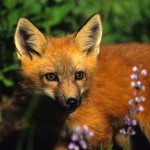 Native Americans enjoyed the fact(?) that the raven, crow, coyote and fox all display behavior that suggests that they appreciate a sense of humor. During a wonderful encounter with a fox pup, Loren Eiseley wrote, “Yet here was the thing in the midst of the bones, the wide-eyed innocent fox inviting me to play, with, with the innate courtesy of its two forepaws placed appealingly together, along with a mock shake of the head. The universe was swinging in some fantastic fashion around to show its face, and the face was so small that the universe itself was laughing.” The Innocent Fox: The Star Thrower.

We have one or more foxes that visit our property on a nightly basis. Unlike our two cats that discretely bury their poop, the foxes proudly(?) deposit their waste as a highly visible “calling card.” There seems to be no end to their creative selection of deposit sites. We have a min-trail for each of 9 grandchildren and the foxes frequently make deposits at the respective trailheads as if they are claiming it as their own. We have many large boulders on the property and they seem to delight(?) in making a deposit on top of the rocks. The image of them balancing on top of a rock to do their business is hilarious. We frequently have “cards” dropped on our deck, along the trails and on the doormat at the entrance to my workshop. Today is Halloween and the fox seemed to be up for the celebration. Christie feeds her cats with tea saucers which she leaves on our back stoop. This morning, when she went for the daily newspaper, she discovered that a fox had left his/her calling card right in the middle of one of the saucers.