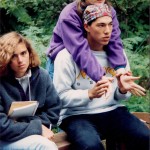 The Biology Of Love  part I

“Love, the Answer to the Problem of Human Existence.”  Erich Fromm

Aaron ( blog #1) recently contacted me asking for a good quote that would be appropriate for a “second-chance” marriage.  His girlfriend had just “said yes” and he wanted something special to share with her.  My heart went out to him but my head was at a loss.  A Hallmark greeting card writer, I was not.  Then, I remembered Erich Fromm’s remarkable thesis.  I was suddenly reminded of the first Biodesign classes that decided that discussing the “biology of love” was important.  They were not talking about “making love,” but a broader, perhaps deeper concept of the origin and meaning of love.

Fromm was born in Germany in 1900 to Orthodox Jewish parents.  I don’t know if he attended a yeshiva and learned the common Sunday School proverb; “We should love people and use things,” but he was keenly aware that materialism was antithetic to spiritual growth.

Fromm wrote, “The Art Of Loving,” in 1956.  He had already lost all hope that Western Civilization would survive because of its failure to understand and practice the art of loving.  He could not have known about the metaphor of the baby sea turtles, but he predicted that societies would be blinded by the glare of materialism.  Tragically, his prediction seems to have merit.  Our society obfuscates or ignores spiritual values by equating a person’s value with the car he drives or the opulence of his home.  Our youth idolize music/video stars, movie stars and athletic stars, even though many lead lives of decadence and degradation.  We are living in unprecedented wealth yet the divorce rate hovers around 50%.  Substance abuse is rampant and beginning in some elementary schools.  Our prisons are overwhelmed.

In the late ‘70s Christie discovered a book simply titled, “Love,” by Dr. Leo Buscaglia.  Buscaglia was an educational psychology professor at the University of Southern California.  He worked with student teachers who mostly seemed to agree that teaching, above all, was really a matter of lovingly encouraging students.  They were more interested in practical strategies and less interested in theory.  He responded by developing a syllabus for a “Love Class” and presented it to the University Curriculum Advisory Board for approval.  Mostly, they scoffed at him and reportedly, one member asked an insidious question, “Are you going to have lab. demonstrations on various positions?”  He would not be denied.  He returned later with the offer to teach a non-credit course, free of charge, if the University would include it on its course offering list, and make a classroom available.  Again, the committee questioned the value, but because he was a respected professor, they acquiesced.  Each semester the class was booked to overflowing as college students were eager to discover how to be more loving humans.  Later Buscaglia wrote, “Personhood,” which is a wonderful collection of examples of how to strive to become a more “fully-functioning” person.

Meanwhile, Gibran’s “Prophet” had become almost a daily reference and offered a cornucopia of wisdom of the spiritual nature of man, which included his capacity for love.

It included amazing stories and information, however, much of her information corroborated what we had already been discovering.  All of our references agreed that true love was not a transitory feeling, but an action, that often involved self-denial, sacrifice or delaying gratification for the benefit of the one loved.