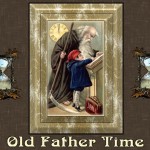 Warning! Readers of this post are likely to experience a severe brain cramp!

Unbeknown to me, a quiet, thoughtful Latina girl went to church the following Sunday. After the service, she approached her priest and asked, “Father, if God made the universe, what made God?” The priest’s face turned red, and he stooped down and whispered sharply in her ear, “We don’t ask questions like that!”

Circa 400 AD, Augustine of Hippo formulated the first known version of the “Big Bang” theory. There may be no “scientific” proof for the existence of God, but 1600 years later, scientists have not been able to refute his theory. In fact, excepting the cause, it aligns well with the currently accepted “Big Bang” theory.

I suspect that this will be the most extraordinary blog-post I will ever write and, as usual, it involves someone else’s thinking process. I am not being self-deprecating, it’s just that many of the world’s greatest minds are far more intelligent than I.

This includes a pantheon of scholars including Bishop Augustine of Hippo. In 397 he wrote, Confessions: in thirteen books, which, according to some scholars, is the greatest collection of books other than the Holy Bible. It had a profound impact on the evolution of Christianity and Western philosophy, ergo Western Civilization.  In a wonderful synchronicity, I found Eric Rosenfield’s post on-line:

“In 1917, Albert Einstein completed work on the General Theory of Relativity, one of the rules of which states that time is fundamentally bound to matter and gravity, and that without matter there would be no time. Oddly, this concept was presaged almost 1,300 years before that when Bishop Augustine of Hippo (later St. Augustine) put forth the idea that when God created the Heavens and the Earth, he created time itself as well. Before Augustine, no one that we know of had tried to consider “time” as being something changeable, something that could start and stop; after all, we always perceive time as moving forward, and contemplating temporality as being finite or malleable seems unnatural, and the implications headache­-rousing. Plato and Aristotle both regarded time as being infinite. Yet it was Augustine’s application of the methods of the principles of Grecian philosophy and reason to the Christian concept of God that forced him to arrive at his conclusions…”

But then, what’s really strange about Augustine’s interpretation of the eternal nature of the Beginning is that, when taken entirely apart from the Bible, it resonates not only with Relativity (Augustine saying that for the World to happen in time there must have been something that experiences time being roughly analogous to Einstein saying that matter and time are linked, and without one you would not have the other) but also with modern Big Bang Theory. Briefly, according to Big Bang Theory, because matter and time are so inextricably bound, when all the matter in the universe was compressed into a single point it formed what’s called a “quantum singularity” in which, the math shows, the curvature of time and space became infinite. This means the Big Bang singularity exists at all times at once, in all places at once much like Augustine’s God – ­ the singularity that created the universe is all around us, all the time, forever. Of course, it’s not a perfect correlation, since whether a quantum singularity wants to offer us salvation through its divine grace, like Augustine’s God, is another question entirely.

Moving forward in Book 11, Augustine then asks, “What exactly is time?” and says, somewhat comically, “If no one asks me, I know what it is.” We know that time, he states, has three parts – the past, the present and the future. And yet, we also know that the past and future don’t actually exist, since we can in no way interact with them except when they are the present. That is to say, if the past and the future exist in the physical way that the present does, we have no way of knowing it, because we only experience the present. And yet, if the past and future don’t exist, then what exactly are we measuring when we measure time? Obviously, time itself exists, since it can be measured, and yet if we say something is a hundred years ago, what exactly is that hundred years ago when it is past and therefore doesn’t exist at all? And since the present must become past in order to be time (otherwise, it would be eternity), then if “time present — ­­ if it be time —  ­­ comes into existence only because it passes into time past, how can we say that even this is, since the cause of its being is that it will cease to be? Thus, can we not truly say that time is only as it tends toward nonbeing?” He then tries to further examine what exactly is meant by the term “present”, since the present cannot be broken down and examined – is the present a second, a nanosecond, less than a nanosecond? In truth the present has no length at all, it can only be measured as it passes from future into past – two states that do not actually exist – and therefore, can it be said that the present actually exists at all?”

In a devilishly humorous irony, in his book, The Great Design, Stephen Hawking proceeded to claim that believing in God has become obsolete because the universe is so complex that it created itself out of NOTHING! Imagine that. Hawking has egotistically assumed that he is smarter than God ergo; God must be obsolete.

So, 1600 years ago, Bishop Augustine proposed a theory that is just as plausible today as anything science has to offer. The fact that he chose to name the Great Mystery “God” and Stephen Hawking chose to name it “nothingness” suggests that Moses was correct when he  wrote, 3500 years ago, that man has been endowed with the awesome privilege of “free will”.

According to the “Big Bang Theory”, the universe is 13.8 billion years old, there are 100 billion galaxies in the known universe, the earth is 4.5 billion years old and there are 7 billion people living on our planet. So, what are the odds of us being here at this precise moment?