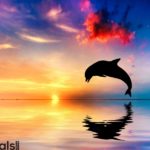 One of the primary reasons that John Muir, Loren Eiseley and Annie Dillard were celebrated as major mentors in the Biodesign Class was their respective genius in describing playfulness as a quintessential component in the biology of Planet Earth.

Dillard described dolphins frolicking in the water around the Galapagos Islands. I suspect that she would ascribe the same term to the 1000s of dolphins that demonstrate their propensity of playing by body-surfing on the bow-waves of ocean-going ships.

In an early morning, chance-born event, Loren Eiseley put an old chicken bone in his teeth and tumbled in the grass with a fox cub. He later described the experience as: “The gravest, most meaningful act I shall ever accomplish, but as Thoreau once remarked of some peculiar errand of his own, there is no use reporting it to the Royal Society.”

Muir’s splendid description of an event that he and his wonder-dog
“Stickeen” shared on an Alaska glacier, revealed the dog’s huge capacity for play. The account is widely considered one of the greatest man/dog adventures ever told. I read the story annually and every time I expect “Stickeen” to leap off of the page, onto my lap and begin licking my face.

Thoreau’s mention of the Royal Society refers to the inability of hard-wired (left-brain-dominant) scientists to identify or explain the reason for playfulness. There is simply no scientific model that will work; no pragmatic or utilitarian facts exist. Darwin’s theory is useless. Millions of plants and animals have survived for billions of years without playfulness, so what value is it? Or perhaps more importantly, where did playfulness come from?

If scientists have utterly failed in this regard, many theologians and religious leaders haven’t fared much (if any) better. In fact, many may have made matters worse.

Buddha described the human condition as “inherently miserable.” For over 2000 years of Christianity, there have been overt and subtle ways of observing the pathetic aphorism, “smite thyself thy wretched worm.” John Muir’s father epitomized this twisted logic by daily whippings of his son to beat him into memorizing the Holy Bible. It is no small miracle that Yosemite and the mountains healed Muir’s emotional wounds. “The galling harness of civilization drops off, and the wounds heal ere we are aware,” JM. It is an even greater miracle/irony that Muir emerged with such a playful soul.

I am certainly not a Bible scholar, but in nearly 900 pages of the Old Testament there is a paucity of references to playfulness.

Zechariah 8:5. “The city streets will be filled with boys and girls playing there.”

Jeremiah 30:19. “And thanksgiving and [the] sound of merrymakers will come out from them, and I will make them numerous, and they will not be few.”

Jeremiah 30: 4. “I will build you up again, and you, Virgin Israel, will be rebuilt. Again you will take up your timbrels and go out to dance with the joyful” (playful).

Psalms 104: 25-26. “There is the sea, vast and spacious, teeming with creatures beyond number—living things both large and small. There the ships go to and fro, and Leviathan, which you formed to frolic there.”

I am somewhat more familiar with the New Testament, however, Google does not show any teachings of Jesus or St. Paul that could be considered playful. The only example might involve Christ’s first miracle at Cana. Did he turn water into wine because he was concerned about the wedding guests losing some of their jocularity (playfulness)? Or is this what he meant when he said: “Truly I tell you, unless you change and become like little children, you will never enter the kingdom of heaven”?

And then C.S. Lewis appeared. In his wonderful series; The Chronicles of Narnia, written for children from 5 to 95; he wrote in: The Lion, The Witch and The Wardrobe:

“’Oh, children, said the Lion, ‘I feel my strength coming back to me. Oh, children, catch me if you can!” He stood for a second, his eyes very bright, his limbs quivering, lashing himself with his tail. Then he made a leap high over their heads and landed on the other side of the Table. Laughing, though she didn’t know why, Lucy scrambled over it to reach him. Aslan leaped again. A mad chase began.”

Although Lewis does not invoke the word playfulness, he brilliantly infers that it is an essential part of the Creation Story.

He seems to suggest that if God truly made man in His image, playfulness must be a part of the equation. And just maybe, that is the crux of our dilemma? Many African cultures seem to understand this concept by exclaiming (when they experience extraordinarily tragic or joyful events); “God is playing with us!”

However, I doubt that less than one in a million people (regardless of race, religion or creed) would include playfulness in God’s job description. If so, citing C.S. Lewis, it would be a very sad commentary on the human experience.