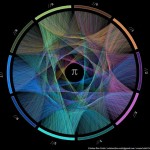 “I’ve learned that it’s only when we try to stretch our minds around mathematics’ enigmas that true understanding can set in.”

BALTIMORE — EACH year, March 14 is Pi Day, in honor of the mathematical constant. Saturday is the once-in-a-century event when the year, ’15, brings the full date in line with the first five digits of pi’s decimal expansion — 3.1415. Typical celebrations revolve around eating pies and composing “pi-kus” (haikus with three syllables in the first line, one in the second and four in the third). But perhaps a better way to commemorate the day is by trying to grasp what pi truly is, and why it remains so significant.

Pi is irrational, meaning it cannot be expressed as the ratio of two whole numbers. There is no way to write it down exactly: Its decimals continue endlessly without ever settling into a repeating pattern. No less an authority than Pythagoras repudiated the existence of such numbers, declaring them incompatible with an intelligently designed universe.

And yet pi, being the ratio of a circle’s circumference to its diameter, is manifested all around us. For instance, the meandering length of a gently sloping river between source and mouth approaches, on average, pi times its straight-line distance. Pi reminds us that the universe is what it is, that it doesn’t subscribe to our ideas of mathematical convenience.

Early mathematicians realized pi’s usefulness in calculating areas, which is why they spent so much effort trying to dig its digits out. Archimedes used 96-sided polygons to painstakingly approximate the circle and showed that pi lay between 223/71 and 22/7. By the time Madhava (in India, around 1400) calculated pi to over 10 decimal places using his groundbreaking infinite series (which regrettably bears Leibniz’s name), it was already more than accurate enough to address all practical applications. Pursuing pi further had essentially become a mathematical challenge.

With the advent of computers, pi offered a proving ground for successively faster models. But eventually, breathless headlines about newly cracked digits became less compelling, and the big players moved on. Recent records (currently in the trillions of digits) have mostly been set on custom-built personal computers. The history of pi illustrates how far computing has progressed, and how much we now take it for granted.

So what use have all those digits been put to? Statistical tests have suggested that not only are they random, but that any string of them occurs just as often as any other of the same length. This implies that, if you coded this article, or any other, as a numerical string, you could find it somewhere in the decimal expansion of pi. Of course, that’s relatively meaningless, since you don’t know where to find the material you want. An apt metaphor for an age when we are being asphyxiated by mushrooming clouds of information.

But pi’s infinite randomness can also be seen more as richness. What amazes, then, is the possibility that such profusion can come from a rule so simple: circumference divided by diameter. This is characteristic of mathematics, whereby elementary formulas can give rise to surprisingly varied phenomena. For instance, the humble quadratic can be used to model everything from the growth of bacterial populations to the manifestation of chaos. Pi makes us wonder if our universe’s complexity emerges from similarly simple mathematical building blocks.

Pi also opens a window into a more uncharted universe, the one consisting of transcendental numbers, which exclude such common irrationals as square and cube roots. Pi is one of the few transcendentals we ever encounter. One may suspect that such numbers would be quite rare, but actually, the opposite is true. Out of the totality of numbers, almost all are transcendental. Pi reveals how limited human knowledge is, how there exist teeming realms we might never explore.

The combination of utility and mystery makes pi a perfect symbol for all of mathematics. Surely the ancients, had they understood pi better, would have deified it, just as they did the moon and the sun. They would have praised pi’s immutability: Pi = 3.14159… is one of the few absolutes that remain.

Or is it? The ratio of circumference to diameter might not be as fixed as we think. To understand why, imagine a circle drawn on the surface of a sphere. Its diameter, as measured along the bulging surface, will be greater than if the same circle is traced out on a flat sheet of paper. This observation might have been of only academic interest except for our inability, so far, to definitively determine whether the geometry of our universe is flat. If there is even a little curvature, then the value of pi, as defined by this ratio, is not what we think.

But pi, on cue, reminds us that it is an abstraction, like all else in mathematics. The perfect flat circle is impossible to realize in practice. An area calculated using pi will never exactly match the same area measured physically. This is to be expected whenever we approximate reality using the idealizations of math.

Many decades ago, a teacher had me memorize another approximation, pi =22/7. Except she told my class this was pi’s exact value. Perhaps she feared we’d be as traumatized as Pythagoras by the idea of a non-fractional universe; more likely, she didn’t want to confuse us. I wish we’d had Pi Day then, because pi = 22/7 was a misconception I carried all the way to college. Since then I’ve learned that it’s only when we try to stretch our minds around mathematics’ enigmas that true understanding can set in.