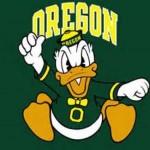 “One of the students asked him what he thought was the most pressing issue in our society. It appeared as a scripted moment. Acting as if he knew the question were coming, he responded, “situation ethics. Sociocultural, family and religious traditions are being eroded and replaced with the doctrine of, ‘if it feels good, do it.’ It’s a spiritual disease, but the farther people drift, the less they will be aware of that.”

Years of preparation, hundreds of thousands of man-hours on the practice field, in weight rooms and watching films of opponents; thousands of hopes and dreams of coaches and athletes all went up in smoke! Marijuana smoke!

“Pot” smokers claim that marijuana is harmless and should be legalized because it involves “victimless” crimes. However, due to a reprehensible act of selfishness, University of Oregon coaches, athletes, cheerleaders, professors, deans, 20,000 students and millions of U of O fans became “victims.” So too are the thousands of coaches who are valiantly trying to field teams of athletes who are morally honest enough to play the game by the rules.

Two days before the Oregon football team was to travel to Arlington, Texas to play for the National Championship title, star wide receiver Darren Carrington was disqualified by a NCAA mandatory drug test. Suddenly, the highly synchronized Duck’s offense was thrown into catastrophic disarray. The chemistry between Heisman Trophy winner, Macus Mariota and his star wide receiver was lost. Oregon compensated by increasing the ground attack, but when Ohio State countered, there was not enough aerial power to balance Ohio’s offense. For the 2014 season, Oregon averaged 47.2 points per game and crushed undefeated Florida State in the Rose Bowl 59-20. Carrington scored two touchdowns in that thrashing, so there is little doubt that, had he played, the final score would have been different. Instead, Oregon coaches and players will spend the rest of their lives wondering “what if”?

So why do I care? Because I know exactly how Oregon Head Coach Mark Helfrich feels.

Dr. Scott Peck, The Road Less Traveled, suggested that the greatest cause of human suffering in the US is the inability of people to “delay gratification.” And so, for the momentary kick out of puffing on a “joint” the hopes and dreams of thousands have been dashed.

In the mid 1980s, there was widespread abuse of alcohol and pot on various SHHS overnight trips.  The administration heard of the abuse and announced that any future abuse would result in all future trips being cancelled. The Biodesign field trips were the life-blood of the program and cancelling them would mean cancelling a class that I was deeply passionate about. Before each trip, the students were required to sign a contract promising to be drug and alcohol free. I assumed that a “promise was a promise” and pressed on. However, on one occasion, I became aware that two boys were planning to take “pot” on the Grand Canyon trip. The news was devastating and I decided to cancel the trip. However, several concerned students asked that if every class member held up his/her right hand, looked me in the eyes and promised to not take pot along, would I lead the trip. I acquiesced. After the trip, however, by a very mysterious process, not involving humans, I became aware that the two students in question had broken their pledge. The discovery made me feel like they had shoved a knife in my back! When I confronted the two violators, one of them wept bitter tears; the other one smiled, shrugged and said “you can’t blame me for trying.” They both knew that, if caught, they would be suspended from school for week, receive an automatic “F,” be dropped from the class and letter of reprimand would be included with their cumulative records.

The event was horrible, however, it was a powerful lesson for us all about the potential perils of searching for truth, beauty and goodness.

So recreational use of marijuana is now legal in Colorado. Teachers of kids from the 5th grade thru high school are seeing a sharp increase in students coming to classes stoned. As an ex-teacher, I am familiar with the symptoms; students slouching in their desks, eyes bloodshot and glazed over, a silly grin on their face and decreased ability to mentally focus and retain information.  They were antithetic to kids who were mentally alert, enthusiastic and curious about their lessons.

Evidently the people of Colorado do not share the concerns that doctors and psychiatrists have that marijuana use retards senses, reduces motivation and destroys brain cells.

Although the war on drugs may appear to be ideological, it is nothing less than a spiritual war over the hearts and souls of every U.S. citizen. Colorado recently lost a key battle in the war and the thought that, in the near future, 5th grade teachers may have to cope with a class of stoned 10-year-olds is totally abhorrent.