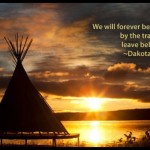 “And while I stood there I saw more than I can tell and I understood more than I saw;for I was seeing in a sacred manner the shapes of all things in the spirit, and the shape of all shapes as they must live together like one being.”  – Black Elk

He has achieved success who has lived well, laughed often, and loved much;
Who has enjoyed the trust of pure women, the respect of intelligent men and the love of little children;
Who has filled his niche and accomplished his task;
Who has never lacked appreciation of Earth’s beauty or failed to express it;
Who has left the world better than he found it,
Whether an improved poppy, a perfect poem, or a rescued soul;
Who has always looked for the best in others and given them the best he had;
Whose life was an inspiration;
Whose memory a benediction.

I have been involved in “education” for 67 years and I know of no other person who exemplified every line of Bessie Stanley’s poem more beautifully than Joan Ainslie Chapman. Few students attending St. Helena Unified School District between 1965 and 1982 will likely remember who the Superintendent of Schools was or even all of their teachers’ names, however, I suspect that very few will have forgotten Joan Ainslie. It is uncommon for a school nurse to have anything more than  a common, medical relationship with her students; there was nothing common about “Nurse Ainslie.” The first impression she offered was her stunning beauty. Her earth-tone brown skin and curly, raven-black hair were accented by her brilliant blue eyes that flashed and danced. She would never mention it, but blue eyes were considered a sign of royalty, if not goddess-like status in her Tuscarora Indian tribe.  She radiated a love of life that was contagious; was extremely proud of her First Nation heritage and was eager to share the wisdom she gained from thousands of years of tribal history.

She graduated from Syracuse University with a prestigious BS degree in nursing and continued her education with courses in audiometry, school nursing and school administration. Joan was one of those rare people who “lit up a room” when she entered. Whether at a faculty party, stuffy school board meeting, leading a class or large group discussion on various health and hygiene issues, all were handled with grace and humor. In addition, she was willing to lead educational workshops on Native American history, folklore, medicine and religion.

During her tenure, very few high school “young men” complained about having to miss class to have their eyes and ears tested by the “foxy” Nurse Ainslie.

My father once said; “If something is worth doing, it is worth doing well,” and everything Joan did, she did well. In addition to her many tasks as the SHUSD Nurse, in 1966 she was instrumental in establishing the “St. Helena Cooperative Nursery School” in the abandoned schoolhouse in Rutherford, Calif. Next year the school will mark its 50th anniversary.

Another one of her accomplishments was to make a huge contribution to the St. Helena Elementary School outdoor-education program known as “Fifth Grade Camp.” Each spring, the entire 5th grade class (100 students) was bussed to Alliance Redwoods Camp near Occidental, Ca. In addition to helping with nature walks, first-aid instruction and a myriad of camp activities, Joan erected a full-size Native American tepee where she conducted pow-wows demonstrating aspects of the Native American way of life. These meetings became a hit with the students and created memories that will last their entire lives. By the end of the week most of the campers were in love with the beautiful, enchanting “Mrs. Ainslie.” She may have created the only program in the US where students were exposed to a teacher/nurse, storyteller and fountain of wisdom. It was common for girls from K-12 to admire her as a role model and someone they aspired to be like.

In an intriguing synchronicity, in 1974, while Joan was working at St. Helena High School, I was privileged to be a part of an advanced biology class that examined many examples of Native American wisdom, philosophy, folklore, ecological knowledge and spirituality. Many, if not all, of these elements resonated deeply with many of the uncomplicated and beautiful qualities of Joan’s personhood. Having two children attending SHHS, she was well aware that in the US History book, the history of the 500 Native American tribes, living in the US, was reduced to one half of a page titled, “Cowboys and Indians.”

We never discussed it, however, I am quite sure that she would have smiled and wondered why “modern” American schools ever separated the physical, mental and spiritual components of man. Tragically, our “electronic-obsessed” schools are drifting farther and farther away from the beauty, inspiration and messages that Joan learned to appreciate as a Tuscarora child and generously shared with all who cared enough to listen.

After she left St. Helena, she went to Sacramento where she worked in the American Indian Education Office for the California Department of Education. She married Stanley Chapman and they worked together to establish a library home at Chapman University for many of the rare and important items that she used in her distinguished career in education.

After she retired, Joan remained active in American Indian issues and was instrumental in founding of the “Smithsonian Institution’s National Museum of the Native Americans” and was an invited guest to opening ceremonies in Washington D.C. http://www.nmai.si.edu/searchcollections/home.aspx

Joan Ainslie Chapman always looked for the best in others and gave them the best she had:

Her life was an inspiration;
and memory a benediction.

If Joan Ainslie Chapman has not transcended to her, “Happy Hunting Ground,” nothing on this planet makes any sense.