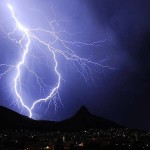 Tom Stienstra is one of my favorite outdoor journalists. He writes a column for the San Francisco Chronicle covering a wide range of outdoor topics including hiking, hunting, fishing, camping, backpacking, kayaking, canoeing and wilderness adventures. He is a talented writer with a wealth of knowledge about all aspects of the aforementioned subjects. Although he rarely cites John Muir, his personal encounters in, and descriptions of nature put him in the same pantheon of nature lovers as Muir, Eiseley, Thoreau, Agassiz, Humboldt, Audubon and others.Loren Eiseley claimed that all adventures into the wilderness create images and impressions that are always interesting to share and discuss. Tom’s column typically rises to a high level of naturalist writing.

His recent article on the beauties and potential perils of experiencing lightning storms is an excellent sample of his knowledge and skilful writing (Enjoy nature’s light show in a safe, reasoned manner – SFGate). He did not invoke Muir, “Let us make haste to join the storm and see what treasures Nature has in store for us,” but he did a good job of describing the dreadful/exhilarating feeling of being close to a lightning strike. Muir further described a deep love of nature in all of us and suggested that love is energized by all of the various kinds of storms. Although communicating the mysteries and wonders of Nature (spirituality) may be as difficult as capturing lightning in a bottle, those descriptions become the Holy Grail of Nature writers.

When Tom reminded me that lightning bolts typically exceed 50,000 degrees, it reminded me of the masses (and madness) of high school (and university) biology teachers who routinely describe the origin of life as being caused by a lightning bolt. I doubt that there is a scientist on the planet who would foolishly suggest that life is possible on the sun’s surface (10,000 F), however, an overwhelming number of them glibly suggest that life was started by a lightning bolt.

Carl Sagan wrote, “There are more atoms in a DNA molecule than in a typical galaxy.” Hmmm. Is it really possible to conceive that a bolt of lightning could spontaneously organize billions of atoms into the first DNA molecule on the planet? Of course, he did not explain the origin of the original carbon, hydrogen, nitrogen and oxygen atoms necessary to create that first DNA molecule. The leap from single DNA molecule to the first prokaryotes is massive and one that scientists have yet to understand or explain.

If biology teachers are truly intellectually honest, they find themselves in a huge ethical and moral dilemma. They obviously can not “scientifically” describe the origin of life as being caused by God (or some form of Supreme Being) and they can not claim that life was caused by “nothing.” Evidently, Thomas Huxley ( and his crones) in their haste to anoint Charles Darwin as the new God of Creation, huddled together and agreed that life must have been caused by a lightning bolt. Many modern scientists continue to perpetuate this myth. There is nothing in science that supports his theory. In fact, what we do know is that living organisms often do not survive a direct lightning strike. While few forms of life can withstand temperatures above 212 degrees F, some rare forms of marine bacteria can withstand 121 degrees C (249.8 degrees F). As amazing as that might be, 249.8 degrees F is a far cry from 50,000 degrees F. To most rational minds, this renders the theory that life was started by a lightning bolt as one of the greatest fool’s errands that modern scientists have blindly claimed to be true.

The only honest description for the origin of life is similar to the origin of the Universe; both remain as events without a known cause, which means that they are unfathomable mysteries. Celebrate the Mystery.