The word “kything” became more widely known in 1973 when Madeleine L’Engle published, A Wind in the Door. Evidently she was looking for a term that described soul-to-soul communion and found the word, “kythe” in an 1856 Scottish Dictionary. I was elated by the glorious synchronicity that, although I don’t recall John Muir ever using the word “kythe,” he experienced an intense mystical event that evinced the etymology of the Gaelic-born word. 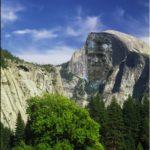 Excerpt: My First Summer In The Sierra, John Muir.

“August 2—Sketching all day on the North Dome until four or five o’clock in the afternoon, when I was busily employed thinking only of the glorious Yosemite landscape, trying to draw every tree and every line and feature of the rocks, I was suddenly, and without warning, possessed with the notion of my friend, Professor J.D. Butler, of the State University of Wisconsin, was below me in the valley, and I jumped up full of the idea of meeting him, with almost startling excitement as if he had touched me to make me look up.

August 3—Had a wonderful day. Found Professor Butler as the compass needle finds the pole. So last evening’s telepathy, transcendental revelation, or whatever else it may be called was true; for strange to say, he had just entered the valley by way of the Coulterville Trail and was coming up the valley past El Capitan when his presence struck me. Had he then looked toward the North Dome with a good glass when it came into sight, he might have seen me jump up from my work and run toward him. This seems the one well-defined marvel of my life of the kind called supernatural…”

I had never heard the term “kything” before 1988 when my soul-mate-wife gifted me with a copy of, Kything: The Art of Spiritual Presence, co-authored by Louis Savary and Patricia Berne.

The book grabbed my full attention, as the authors explored various methods of spiritual communication, however, I found it intriguing when they stated what “kything” is not. They asserted that kything is not mental telepathy, not an imaginary conversation, not channeling and surprisingly, not necessarily a religious experience.

They described it as the “Art of Spiritual Awareness,” whereby two souls can commune in perfect harmony without words. The idea may be based on the concept of “Oneness.” Apparently, applying the concept puts a person “in kythe” with that which he/she is concentrating on. Kything is portrayed as a way to be present with others without regard to space or time. The practice is waning in Scotland and is practically unknown in the US.

The book became a milestone epiphany for me. The concept was provocative and exciting. Even though the Bible is quite clear about the prognosis of life after death, most Christians are understandably often a bit unclear on the mystery. But the ancient Scotts seemed to be convinced that soul communion was quite natural among the living as well as the deceased. Savary and Berne provided a splendid challenge for me.

In the early years of Biodesign, we had experienced many mystical Jungian synchronicities at Yosemite, but I did not imagine that I was “kything” with the holy ghost of John Muir. However, if what they were claiming were true, it seemed as if that was a real possibility.

Over the years after discovering the book, I made a conscious effort to invoke the soul of Muir on our Yosemite trips. I did not have a “Professor Butler” epiphany, but there were countless events that Muir would have called, “supernatural.”

One year, just before we left on our Yosemite trip, I got a little heady and foolishly boasted to the class that we would see a rainbow. I rued my arrogance for five days until on the last day when a glorious rainbow arched above us. We stood in awe-struck silence. After a few minutes, one of the boys edged over and whispered, “OK, how’d you know?”

I humbly shook my head in denial and said, “I didn’t, and I won’t make that mistake again.”

One class was sitting in the dark in a magical circle on top of Half Dome. We enjoyed a 360-degree view under a brilliant canopy of stars. The students were sharing journal reflections, prose, hopes and dreams in perfect sincerity. Suddenly, the whole Class seemed to be raised to a higher level of spiritual awareness. They conjured up Black Elk’s message:

“Then I was standing on the highest mountain of them all, and round about beneath me was the whole hoop of the world. And while I stood there I saw more than I can tell and understood more than I saw; for I was seeing in a sacred manner…”

The next day one of the chaperones approached me with a solemn countenance and said, “I have never seen anything like that.” I agreed without suggesting that it could have been an extraordinary example of group kything.

Whether Muir’s spirit was present cannot be proved, however, the need for proof of an act of kything seems utterly oxymoronic.

Muir was too modest and shy to even imagine that his soul could remain hovering about Yosemite for eternity, but the possibility has become very real to the thousands of people who have “kythed” his spirit there. If asked to explain the soulful events they generally agree that there are no words to describe them; a perfect corroboration of “kything.”