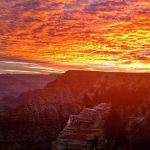 Zora Hurston (“There Eyes Were Watching God”) is credited with coining the phrase, “You got to go there to know there.” While I have found her axiom to be generally true, it is paradoxically true and untrue regarding Grand Canyon. Although, in order to experience “The Canyon,” one must “go there,” it is humanly impossible to “know there.” It is simply too vast, too deep, too long, too old and too mysterious for the human brain to comprehend. In fact many hikers, who hike to the bottom and back up, emerge blissfully bewildered by their experience.

It is quite likely that the one person who experienced this dilemma the most acutely was John Wesley Powell. Powell belongs to an elite pantheon of explorers who accomplished something that had never been done. Even though he was missing one arm, he successfully led an expedition down a river that was considered unnavigable. Native Americans warned him that he and his crew would be swallowed into the center of the earth. After the three-month odyssey, Powell expressed the futility of trying to capture the spirit of Grand Canyon:

He arrived at this conclusion after what many seasoned explorers predicted would be a disastrous expedition ending in death and destruction. He and his crew faced odds and challenges that would have made lesser men quail in defeat. The untamed Colorado River meandered 224 miles through a 5000-foot-deep chasm that offered few or no pathways of escape. The combination of roaring water and huge granite boulders produced “standing waves,” some of which approached 35 feet tall. The only way to survive these waves was to tether their specially designed boats and laboriously “rope” them around the potentially lethal obstacles.

They were frequently cold and wet, much of their food had spoiled, there were several near-drownings and they lost one boat. Understandably, Powell’s men were stressed to the breaking point, prompting three of them to agree to abandon the expedition and take their chances of escaping back to civilization.

Powell handled the little mutiny with compassion and dignity. For all he knew they might be right which led to his musing:

In profound irony, the next day presented an easily navigable rapid, the last threat to the expedition. The three men were never seen or heard from again.

On a much smaller scale, I identified with the stress that Powell experienced. The Biodesign Class intentionally took high school students in into the uncharted educational wilderness and challenged them to explore their God-given-gifts of soul and spirit. Their discoveries ranged from miraculous, magnificent, even sublime, to stressful, painful and terrifying enough to cause about 3% of them to flee in fear. 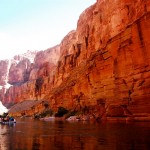 “And now the scenery is on a grand scale. The walls of the canyon, 2,500 feet high, are of marble, of many beautiful colors, often below the waves, and sometimes far up the sides, where showers have washed the sands over the cliffs.”

“The Exploration of the Colorado River and its Canyons,” is an amazing account of the courage, wisdom and tenacity of Major John Wesley Powell and his dedicated crew of  “mountain men” converted to boatmen. They were the first known persons to successfully navigate, what Native Americans called, “The River of no Return.” With only one arm, he led an exploration that was more exciting than an Indiana Jones adventure, because real is always more terrifying than fiction. The party launched four boats on May 24, 1869, heading for the Colorado River that had yet to be tamed by Hoover Dam. Powell’s daily journal described unfathomable hardships including “roping” around 30’ stationary waves.

June 9. Barely two weeks into the voyage, they lost the “No Name” in what they named, “Disaster Falls.”

June 16. “The Maid Of The Canyon” was lost, but recovered undamaged.

June 18. While climbing up one of the cliffs of the canyon, Powell got stuck in a treacherous spot where he could not go up or down without the probability of falling to his death. Fortunately, G.Y. Bradley was able to maneuver above him, remove his pants and lower them down for Powell to use as a rope. Terrifying moments like these are events that can either end in triumph or tragedy.

July 5. Frank Goodman informs Powell that he can’t take any more stress and will leave the party and seek the Uinta Indian tribe and hopefully return home.

July 12. “Kitty Clyde’s Sister” capsizes.  G.Y. Bradley was caught underneath and was dragged underwater the length of the rapids. Miraculously, he survived.

August 13. 75 days into the ordeal, the crew is tired, bruised and bedraggled; the meager rations they have left are moldy or rotten. They have no clue about how far they must voyage and yet Powell writes an astounding entry into his journal.

“We have an unknown distance yet to run, an unknown river to explore. What falls there are, we know not; what rocks beset the channel, we know not; what walls rise over the river, we know not. Ah, well! We may conjecture many things. The men talk as cheerfully as ever; jests are bandied about freely this morning; but to me the cheer is somber and the jests are ghastly.”

August 27. “After supper Captain Howland asks to have a talk with me. We walk up the little creek a short distance, and I soon find that his object is to remonstrate against my determination to proceed. He thinks that we had better abandon the river here. Talking with him, I learn that he, his brother and William Dunn have determined to go no farther in the boats. So we return to camp. Nothing is said to the other men…All night long I pace up and down a little path, on a few yards of sand beach, along the river.”

August 28.  “At last daylight comes and we have breakfast without a word being said about the future. The meal is as solemn as a funeral. After breakfast I ask the three men if they still think it best to leave us. The elder Howland thinks it is and Dunn agrees with him. The younger Howland tries to persuade them to go on with the party; failing which, he decides to go with his brother.” [After provisions and equipment are divvied up] “For the last time they entreat us to not go on, and tell us that it is madness to set out in this place; that we can never get safely through it; and, further, that the river turns again to the south into the granite, and a few such miles of such rapids and falls will exhaust our entire stock of rations, and it will be too late to climb out. Some tears are shed; it is rather a solemn parting;each party thinks the other is taking the dangerous course.”

Powell and the remaining five crew members shove off. The rapids looked worse than they actually were and after one minute the boats were delivered from danger. It was their last ordeal to face.

August 29. Over the next two days, there were several lesser falls and rapids to manage, but on August 30, they meet Mr. Asa and his two sons who had been watching for wreckage to drift by. The expedition had been given up for lost. Both Howlands and Dunn were never seen or heard from again and were believed killed by hostile Indians. Tragically, mysteriously, ironically they labored for 96 days, only to abandon the expedition one day before success.

I never experienced anything close to what Powell and his men experienced. However, there are many real, symbolic and metaphorical similarities to his adventure and the Biodesign program. Both involved wilderness experiences with uncharted territory. Although our physical challenges were not as great, there were moments when the mental and spiritual challenges were intense. On several occasions, parents and school officials expressed anger, fear and doubt that I was leading students into dangerous (perhaps illegal) territory. There were horrifying moments on nearly every trip when I felt the panic that Powell must have felt. Instead of restful sleep, I spent many nights mentally pacing up and down the “sandy beach” questioning if I were on the right path. It was not uncommon for me to bolt upright in my bed or sleeping bag, with beads of cold sweat on my brow. I discovered early on that it was the price that had to be paid and the rewards were often nearly as great as those that Powell and his men experienced navigating Grand Canyon.

Like Captain Howland, I probably would have abandoned the Biodesign Program several times, however, the students (and my wife) kept encouraging me to press on.Eventually, the 24-year expedition included 15 trips to the bottom of Grand Canyon and communion with the spirit of John Wesley Powell.