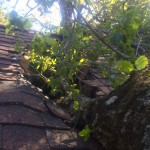 Hebrews 13:2 – Do not forget to entertain strangers, for by so doing some people have entertained angels without knowing it.

After 74 birthdays, I did not expect that #75 (with the exception of a few b-day cards) would offer much that was new or exciting. I should have remembered that one of the great spiritual elixirs of life is the element of surprise.

Recently, I was working out in our barn when suddenly a huge cracking noise caused the building to shudder. I had never experienced such an event and did a quick check of possible causes:

Earthquake? No sickening rocking and rolling.

Mack Truck? We live at the end of a very small country lane.

Gas explosion? The sound was a large “crack!” not a big boom.

Meteorite? I would have to investigate.

I finished gluing the desk drawer-front and went outside. 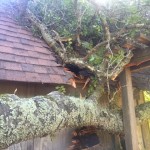 It was immediately clear that a massive Live Oak tree, on the neighboring vineyard property, had crashed onto our barn creating a gaping hole in the roof. Although my first responses were shock and anger, those feelings were soon replaced with a deep sense of gratefulness that the damage wasn’t worse. If the tree had fallen twenty degrees to the east, the barn, tank house and workshop could have been totally destroyed, perhaps along with crushing me.

The vineyard manager hired a tree service to remove the tree and I proceeded to remove and replace the shattered rafters and roof sheathing. I left the task of replacing the composition shingles to a professional roofer.

The roofer arrived at our home on 10-14-16. Of course, I had no idea of what was about to happen. He is in his early 30’s and walked and talked with a positive aura about him. He wore a bright smile and his brilliant blue eyes sparkled. Within minutes, our conversation rose above the casual chitchat level to matters of real importance. He mentioned that he served a 4-year-hitch in the US Marine Corps. He described where he was deployed, including two tours-of-duty to battle-torn Iraq.

“When I came under enemy fire,” he said, “I was forced to do some soul-searching and consider the things that are really important to me. My lists did not include making lots of money, material worship or seeking worldly pleasures.”

He voiced his concern about the declining sense of spiritual awareness in the world and faulted the rapidly increasing dependency on electronic devices.

When I thanked him for his service, he thanked me in return and said that it was an honor to serve his country and he “would do it again in a heartbeat.”

Sadly, since I have retired, discussions like this have become few and far between. Ergo, however unlikely, here were two men having a spirit-filled conversation, not in a church, but on top of a barn. Who could have guessed? 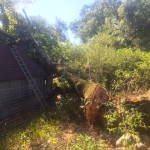 Suddenly, I surprised myself (and him) by asking him what it felt like to be an angel. He looked a bit puzzled, but smiled and asked what I meant. I referred to the opening quote, but with a different twist. I had always assumed that the “angels” being mentioned, knew that they were angels, even if those who they were visiting did not. I asked him if he thought it were conversely possible for people to act as angels without being aware of it? He responded with a childlike sense of wonder and exuberance.

Note: While writing this blog, I found this footnote under one of the reference sites.

“The word angel here is the Greek word (aggelos), meaning messenger, and is the ‘exact’ same word translated messenger.”

I was excited over our eureka-moment. He may have been doubtful of my contention, but whether he knew it or not, I saw him as a living, breathing angel/messenger. He had no idea that 10-14-16 was my birthday and we would be sharing a profoundly mystical experience. On one of his trips to his truck for supplies, Christie invited him to have a cup of coffee and a piece of birthday cake. After serving the coffee and cake, she rolled her eyes and playfully said, “You’ve found your match for a spiritual conversation.”

Back up on the roof, my newly discovered angel agreed.

“You know,” he said, “I will probably forget this roof I am repairing, but I will never forget our conversation.” Enthusiastically, I agreed.

Upon further reflection, I have decided that the roofer was both messenger and message. If he had simply been a “roofer” we would have discussed roofing details, materials and techniques—like whether to use nails or staple fasteners. Instead, our conversation soared to a higher level of humanity, namely spirituality. I welcomed his message, but he was also living proof of Chardin’s contention that humans are spiritual beings having a physical experience.

Biblical scholars concede that there is nearly nothing written about Jesus’ life as a carpenter. I wonder if he had conversations like ours while working on someone’s roof.

Intriguingly, our roofer traveled over 75 miles to repair our barn.  And, although it is highly unlikely that our paths will ever cross again, every time I look up at our roof, I say a little prayer of gratefulness for the Angel that gave me one of the best birthday gifts ever.