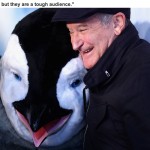 “I love kids, but they are a tough audience.” – Robin Williams

In terms of human history, mandatory education is a very recent social obligation and one that does not suit all students equally. In addition to the Biodesign Class, my yearly schedule of classes included one section of entry-level, life science students. Each class  typically included students with varying learning difficulties, language limitations and attention deficit issues. There were always a few who thought that school was a prison or at best, a boring waste of time. Meeting the needs of these kids was often challenging and stretched my creative/adaptive skills (and patience) to the limit.

One day, we were discussing the variety of cells in the human body and I mentioned that, in order to survive, every cell needed a continuous supply of the gas called oxygen. I pointed out that red-blood cells in the circulatory system pick up a load of oxygen in the lungs and transport it to all 100 trillion cells. I was trying to get them to appreciate the wonder of life and the privilege that it was to be alive.

One of the boys was listlessly slouched in his desk, not particularly impressed with my enthusiasm. It irked me and I decided I needed to prod him a little. He was a spindly kid and my hands easily fit around his throat. I didn’t know it, but we both were about to experience an event that would never be forgotten.

In an exaggerated, dramatic voice I roared, “Mr. Parchim, do you not realize that you are never more than one breath away from death?” Just as if the scene were scripted, his head drooped off to one side. I was impressed with how quickly he understood the little drama and agreed to cooperate with the ruse. However, when I let go of his throat and his head remained dropped over, a horrifying thought flashed through my mind; “Maybe this wasn’t such a bright idea.” At that moment, a student in the back of the room shrieked, “You killed him Mr. Young and now you are in big trouble!”

Over the 37 years that I taught high school biology, I experienced many diversely profound moments, however, none can compare with the horror I was enduring. The next few seconds remain a blur now, but I remember Parchim slowly regaining consciousness. He shook the cob-webs out of his head and said, “Wow! That was cool. How’d you do that?” The students were not quite sure how to process the dramatic disaster; however, all of them, including Parchim, suddenly had a keener interest in the subject matter that we were studying.

As soon as the school day was over, I grabbed a phone and called his mother. After explaining my grossly inappropriate actions, shockingly, she laughed and said that she felt that way dozens of times and that he probably deserved it. I protested that he did not and that it would never happen again.

Ironically, a couple of years later, Parchim’s father died of a rare (untreatable) disease of the circulatory system that involved irregular blood flow. I was saddened by the news, but profoundly shaken that one of my students might have died by my hands.

Somehow, I think Robin Williams would have found great irony and humor in this story.

Lowell H. Young: Author, Biodesign Out For A Walk 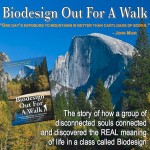 Young’s book relates how a group of disconnected souls connected and discovered the real meaning of life in a high school class called Biodesign.

[Wilmington, NC June 3, 2014] Author Lowell Harrison Young appeared on The Author Show recently to discuss his latest release, ‘Biodesign Out For A Walk’.

Today’s typical high school students are bored. They are disinterested and forced to memorize rote facts that often have no relevance or meaning to their own lives. Technology has forced them to disconnect from Nature and from each other. However, in Young’s Biodesign class, students transcended all of that and went from dissecting fetal pigs to wilderness revelations. They escaped from four drab walls and entered a wilderness classroom under the stars. They went from boredom to mysteries, from profane hallway chatter to discussing the wisdom of Nature’s designs. They went from memorization of minutiae to probing the illimitable freedom of their minds. And finally, they connected with Nature, and with each other, to discover the real meaning of life.

“I wrote Biodesign Out For A Walk in hopes that it will resuscitate readers’s waning sense of wonder, mystery and love of life,” Young stated. “The work is a collection of stories of curious high school biology students who embarked on what Joseph Campbell described as ‘the soul’s high adventure.’  It is a thrilling example of what young minds can do when they are challenged to transcend to higher levels of consciousness, compassion and connectedness.”

‘Biodesign Out For A Walk has received rave reviews and has garnered 16 5-star reviews on Amazon. The book is rated 4.9 out of 5 stars. One reviewer stated, “What Lowell Young has crafted in these pages–and more than that, the experience he created with students for 24 years–is an essential exploration for any reader with an equal passion for tales of authentic education and the natural world. If you find yourself moved to tears, laughter and deeper questions (sometimes in the same chapter) then you’ll have joined the caravan of over 700 of his Biodesign students. No doubt he’s a fitting heir to the work of Muir, Thoreau, Eiseley, and Darwin, and deserves a comfortable place in that good company.”

Lowell Harrison Young is available for media interviews and can be reached using the information below or by email at young.lowell@gmail.com.

Lowell Young and his wife, Christie, have lived in California’s Napa Valley for over 40 years.  Mr. Young taught high school biology for nearly 38 years before he retired.  He holds a Masters’ Degree in the art of teaching biology.

The class that evolved into Biodesign was a collaborative, creative project where the roles of teacher and student were often reversed.  It was well known by the students that although Mr. Young represented the physical nature of the class, Christie’s silent spiritual guidance was often felt in their classroom circles as well as along the many miles of trails they walked.  The Biodesign class may be the only one of its kind taught in a public high school in the country.