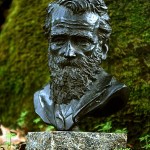 After whimsically describing John Muir as, “St. John of the Mountains,” I have come to suspect the designation may have been more Jungian and less whimsy. If so, his elevation to sainthood may not be an unrealistic overreach. In many ways he lived like an ascetic monk, welcoming hardships that few people would (or could) endure. He survived extended periods in the wilderness with a single wool blanket; tin cup, some tea and a pillowcase containing dried bread-balls.

“Only by going alone in silence, without baggage, can one truly get into the heart of the wilderness. All other travel is mere dust and hotels and baggage and chatter.”

As a highly literate man, Muir was likely aware that his philosophy was closely related to St. Francis of Assisi and St. Ignatius of Loyola. Both men were devout Nature lovers and described all matters natural as the handiwork of God.

“Muir saw nature as a great teacher, ‘revealing the mind of God,’ and this belief became the central theme of his later journeys and the “subtext” of his nature writing.”

Muir joined Henry Thoreau and R.W. Emerson in a brotherhood of naturalists who believed that a quintessential component of becoming fully human involved transcending the confining bonds of logic, reason and egoism in order to be spiritually born: Ergo, Mystery remains Supreme.

Perhaps it is also not a reach to deduce that if Muir had been a member of the Roman Catholic Church, he would have been canonized long ago. However, the reality is that he regarded the universe as his church and being the free spirit that he was, chose not to identify with any particular branch of religion:

“Dam Hetch Hetchy! As well dam for water tanks the people’s cathedrals and churches, for no holier temple has ever been consecrated by the heart of man.”

As a child, he had memorized much of the Holy Bible and his writing often reflected Holy Scripture; as in the case of Psalm 8:

“When I consider Thy heavens,
the work of Thy fingers, The moon and the stars,
which Thou hast ordained;
What is man, that Thou dost take thought of him?” KJV

“From the dust of the earth, from the common elementary fund, the Creator has made Homo sapiens.”

“In God’s wildness lies the hope of the world—the great fresh, unblighted, unredeemed wilderness. The galling harness of civilization drops off and the wounds heal ere we are aware.”

Sometimes his words and deeds can be considered downright evangelical:

“I care to live only to entice people to look at Nature’s loveliness. Heaven knows that John the Baptist was not more eager to get all of his fellow sinners into the Jordan than I to baptize all of mine in the beauty of God’s mountains.”

One of the prerequisites of achieving sainthood is an act of performing a miracle. Because Muir was such a spiritual giant, few would argue that his life, works and legacy have provided inspiration, comfort, even healing for countless millions of people, many of who have experienced Nature-induced “born-again experiences.” His lofty vision of the importance of “eco-spirituality” has spread globally. Through his inspiration and guidance countless thousands of national, state and regional parks have been established worldwide. After Muir’s famous camp-out with Teddy Roosevelt, on top of Yosemite’s Glacier Point, Roosevelt signed into existence five national parks, 18 national monuments, 55 national bird sanctuaries and wildlife refuges, and 150 national forests. Millions of acres have been set-aside for the primary purpose of encouraging people to reconnect with Mother Nature.

“Everybody needs beauty…places to play in and pray in where nature may heal and cheer and give strength to the body and soul alike.” JM

Muir wrote about “poets, philosophers and prophets” coming down from the mountains to improve humanity, but was too humble to realize that he belonged to that pantheon of sages. Countless millions of followers have joined the “Sierra Club” he founded, which has had a huge national and international impact, encouraging people to “go to the mountains” and seek a spiritual rebirth.

The final line in his marvelous story about his little wonder-dog Stickeen was:

“To me Stickeen is immortal!”

In what has become an extraordinary irony, it is truly John Muir who has become immortal in the hearts and minds of countless millions of Nature lovers around the world.

“St. John of the Mountains” has a nice ring to it.