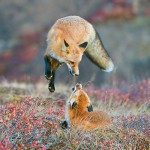 “Surely all God’s people, however serious or savage, great or small, like to play. Whales and elephants, dancing, humming gnats, and invisibly small mischievous microbes – all are warm with divine radium and must have lots of fun in them.” John Muir- The Story of My Boyhood and Youth, (1913)

Native Americans hold a deep respect for animal life, especially birds and mammals. They are often celebrated in their art, legends, totems and folklore. Many shamans believe that animals provide a window into the spirit world. They also provide a source of allegorical humor as in the case of the fox that chased his tail so fast that he ran right up his own rectum. The story reveals the “Redman’s” awareness of the foolishness of circular logic and the danger of avoiding opportunities for spiritual growth.

Paradoxically, one of the most important and least understood spiritual gifts is the art of playing. Stoic old Charles Darwin had no clue where, why and how playfulness originated. The only explanation he and other scientists have offered is that it helps prepare youngsters for the task of hunting. Collectively they ignore the fact that many adult birds and mammals seem to play, simply for the joy of playing and it has nothing to do with survival skills.

Unlike cats who bury their scat and dogs who squat and poop at the nearest convenient spot, foxes seem to be more playful and creative where they leave their calling card. Favorite places on our property are on our redwood deck, at our back door and under our clothesline. However, they often choose large rocks that they have to climb to do their business. Some of these require a good deal of athletic ability to place the poop in just the right spot. Many of the pooping spots seem to be whimsical if not hilarious.

Whenever we have leftover chicken, pork or beef bones, my wife puts them on a familiar rock in our back yard and, without exception one of the resident foxes will retrieve them. We often see them making their rounds, which include stopping at the“bone rock.”

Recently, an adult fox chased one of our cats across our back yard and up on our back porch. The cat scampered up a corner post and rested on a crossbeam. The fox stood on the porch and helplessly looked up. Our back door was open and the fox looked into our kitchen as if he were thinking about inviting himself in.

My wife suspected that we had a den in our area because she kept seeing adults passing by with rodents or rabbits in their mouths. Her suspicion was recently confirmed when, while returning with the morning newspaper, she met the mother, father and two pups trotting down our driveway.

Great naturalists are often great storytellers. John Muir’s story of “Stickeen” ranks among the best “people/dog” stories ever told. However, anthropologist Loren Eiseley wrote a story about a fox pup that rivals the great naturalist raconteurs of the world.

‘The creature was very young. He was alone in a dread universe. I crept on my knees around the prow and crouched beside him. It was a small fox pup from under the timbers who looked up at me. God knows what happened to his brothers and sisters.His parent must not have been home from hunting.He innocently selected what I think was a chicken bone from an untidy pile of splintered rubbish and shook it at me invitingly. There was a vast and playful humor in his face…Here was the thing in the midst of the bones, the wide-eyed, innocent fox inviting me to play, with the innate courtesy of his two forepaws placed appealingly together, along with a mock shake of the head. The universe was swinging in some fantastic fashion around to present its face, and the face was so small that the universe itself was laughing. It was not a time for human dignity. It was a time only for the careful observance of amenities written behind the stars. Gravely I arranged my forepaws while the puppy whimpered with ill-concealed excitement. I drew the breath of a fox’s den into my nostrils. On impulse, I picked clumsily a whiter bone and shook it in teeth that had not entirely forgotten their original purpose. Round and round we tumbled for one ecstatic moment.   For just a moment I held the universe at bay by the simple expedient of sitting on my haunches before a fox den and tumbling about with a chicken bone. It is the gravest, most meaningful act I shall ever accomplish but, as Thoreau once remarked of some peculiar errand of his own, there is no use reporting it to the Royal Society.”