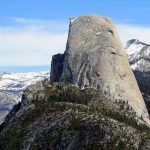 “One day’s exposure to mountains is better than a cartload of books.” – John Muir

“Red exhaustion rips at your throat
and salt sweat spills off your forehead and mats your eyelids and brows…
The long distant runner is paid by the snap of a white thread across his chest.
You are paid by the picture at your feet.”
– Terry Russell: “On The Loose.”

One of the greatest spiritual gifts of the Biodesign Program was the most obvious, least understood and was often taken for granted. The gift is the biological process known as “gender diversification.”

Before each trip to Yosemite, I warned:

“If you want to find out what kind of friend you have, take him/her camping and see.” Perhaps, the same can be said about discovering differences due to gender diversity.

Ever since our first attempt (and failure) to climb Half Dome (1976), it became conspicuously obvious that gender differences transcended from the physical to mental and, perhaps most importantly, spiritual awareness. When discussing spiritual concepts proposed by Muir, Emerson and Thoreau et al, the girls were typically quicker to grasp them. However, for the first 10 years these discoveries remained mostly anecdotal and not well defined. Then, in August of 1983, Omni Magazine featured an article titled, “Superiority of the Female Brain.” The author, Carol Johmann, followed up on Dr. Roger Sperry’s discoveries of the split neocortex in humans. The title was probably a bit hyperbolic, however, Johann described the now widely accepted premise, that, because of increased inter-cerebral neural networks, females are typically more harmoniously balanced than males.

Interestingly, when I presented the new evidence to the Class of ’84, they were not particularly surprised or concerned. In fact, they seemed to be relieved that many of the behavioral differences between males and females, that they were already familiar with, actually had biological origins.

Although I lost my original copy of the Omni Magazine, in a recent, wonderful synchronicity, I was able to replace it. Johmann’s article prompted me to create a literary montage of observations from a few girls in the Biodesign Class.

CLIMBING HALF DOME was the hardest thing I have ever done. There were many times when my body was screaming for me to stop. I don’t normally sweat very much, but sweat matted my hair and streamed down my face. Part of me felt grimy and disgusting, but the amazing scenery, and especially my classmates, urged me to press on. Of course, I had seen photos of “The Cables,” but I was not prepared to climb the granite stairway that ascends the Sub-Dome. There were no railings and both sides of the steps seemed to drop off into oblivion. The weight of my backpack added to the trepidation of every step. Although the climb was physically demanding, the stunning views prompted me to think that I was ascending a stairway to heaven right here on earth. It was a relief to get to the base of the cables, that is until I stood at the bottom and looked up.

I REMEMBER Mr. Young mentioning that because girls typically have smaller bodies and weigh less than guys, that they should try to keep their backpacks as light as possible. I weigh 105 lbs. and am not particularly athletic. Suddenly, looking up at the top of Half Dome, my 35 lb. backpack felt like it was full of rocks. I began to cry as wave of fear swept through my body. I was absolutely certain that there was no way I would be able to reach the top.

IN AN ATTEMPT to keep our circles gender-blended, Mr. Young would frequently say, “form a circle; roses and thorns.” It was definitely not “p-c,” though he did not specify just who the roses or thorns were. However, the girls typically felt like they were the roses and the more “macho” guys took a little pride in being considered thorns. In this case, he informed us that we would ascend The Dome in a roses and thorns line. He added that this was not a time for pride, guilt or self-doubt and we should all help and encourage each other.

Amazingly, after we started up, it wasn’t as scary as it looked. My partner stayed close behind me and offered his support and the reassurance that he literally “had my back.” When we reached the top, my feelings about heaven-on-earth intensified. With tears and laughter, we joined in a massive group hug with a sense of joy and exuberance that I had never felt. I was totally exhausted, but I had never felt better in my life.

ON THE WAY HOME, I was floating on a cloud, filled with wonders, visions and marvels of Yosemite. I guess I thought the euphoric feeling would never end. What a mistake. Back at school some of my friends resented my exuberant behavior. I realized that I was one week behind on homework assignments and some teachers resented my joyful attitude. I panicked when I noted the looming deadline for college applications and my parents seemed to be making excessive demands on my time.

My emotional high crashed and I wondered if the trip were worth the anguish I was feeling. Then I remembered a poster we had on our biology lab wall.

“You cannot stay on the summit forever; you have to come down again. So why bother in the first place? Just this: What is above knows what is below, but what is below does not know what is above. One climbs, one sees. One descends, one sees no longer, but one has seen. There is an art of conducting oneself in the lower regions by the memory of what one saw higher up. When one can no longer see, one can at least still know.”    Renee Daumal

And then a major epiphany! Half Dome was very real, but it was also symbolic and metaphorical. When I was on the top, I remember turning around and Cloud’s Rest loomed 1000 ft. above me. I realized that if I climbed that, there would be an endless number of Sierra peaks to climb, some nearly twice as high as Half Dome.

So this is what I have learned. Life involves climbing an endless series of Half Domes. I am sure that college will be a gigantic H-D experience. If I decide to marry and have kids, my future husband and children will surely provide many H-D challenges. However, I have discovered a source of untapped power that will enable me to accomplish anything I set my mind on. Some of my challenges will likely be extremely difficult, and require an investment of blood, sweat and tears, however, each new mountaintop experience will provide vistas, joys and sorrows that I could not experience without them.”

Note: One of the greatest blessings that I received as a teacher was to watch young adults express words of wisdom that many adults will never fully comprehend. The last, very perceptive young woman could have likened her mountaintop revelation to the doomed Sisyphus, but she accepted the stress and pain as the price for becoming spiritually alive. She was wise beyond her years and no doubt attended a college or university where many of her PhD holding professors had little (if any) knowledge of what she had discovered.