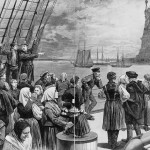 From a purely biological perspective, what has evolved into what is currently called the United States, is simply a matter of ecology. Darwin would describe it as “survival-of-the fittest,” but it involves plants and animals seeking a place on the planet to live. From a spiritual perspective, however, according to Kurt Vonnegut (Cat’s Cradle) God went away and left it to us figure out the meaning.

Our daughter Maureen recently informed me that the earliest immigrants to North America crossed the Bearing Land-bridge circa 70,000 years ago. They were either escaping brutal tyrants, following food sources or seeking a better place to live. I had previously thought that they immigrated 40,000 years ago and mentioned in, Biodesign Out For A Walk that I felt it was disingenuous to credit Christopher Columbus with discovering America in 1492. Also, while it is true that the Pilgrims may have been the first white settlers to successfully immigrate to the New World, many other groups have since immigrated and made huge contributions to the unique human tapestry of people called Americans.

This brought me back to the one “immigrant” who profoundly changed my life. He was the most responsible for the Biodesign Class and therefore this facebook page and website. As a lad, in his native Scotland, John Muir experienced the horror and pain caused by diseases, poverty and semi-starvation that were common.  Eight out of ten of his aunts and uncles died from the “white plague” (tuberculosis). Life in both of the northern lands of Ireland and Scotland was often harsh. The temperatures were often cold; the soil too poor for crops and the growing season was short. Little wonder for the phrase, “Scotland’s greatest export was her people.”

Daniel Muir and three of his children immigrated to the US in 1849. After crossing the Atlantic, they made the arduous 1,000-mile-trip, up New York’s Hudson River, 380 miles along the Erie Canal and eventually, by horse-drawn wagon, to Portage Wisconsin.

John Muir eventually walked to Florida, in hopes of sailing to Brazil to retrace the footsteps of naturalist Baron Von Humboldt. Unfortunately (?) he contracted Malaria and his doctor recommended that he go to California. He sailed to Cuba and later to Panama, where he crossed the Isthmus and sailed up the West Coast, landing in San Francisco in March 1868. In his only reference to the sea voyage he wrote, “Never had I seen such a barbarous mob, especially at meals.” After landing in San Francisco, he walked south to Pacheco Pass, across the San Joaquin Valley to Yosemite Valley.

Although he could not have known it at the time his walk would be what Thoreau called a “saunter” to the holy land (ala sainte terre). He walked into what he later described as a “cathedral”, eight miles long, one mile wide, one mile high, with stained glass windows, incense cedar, Half Dome altar and the sky for a ceiling. He came down from the mountains like an Old Testament prophet preaching: Repent! Repent! The kingdom of Nature is at hand!

In an amazing irony he wrote:

“The mountains are fountains of men as well of rivers, of glaciers, of fertile soil. The great poets, philosophers, prophets, able men whose thoughts and deeds have moved the world, have come down from the mountains—mountain-dwellers who have grown strong there with the forest trees in Nature’s work-shops.”

So Moses came down from Mt. Sinai with the “Ten Commandments” and Muir came down from the Sierra Nevada Mountains with a spiritual message that has “moved the world.” Although the US National Park Service was not created until 1.5 years after his death, his life and work have become a beacon of light shining around the globe. No other Nature writer has stirred the souls of so many people.

Although Ellis Island wasn’t opened until 1882, I am certain that Muir would have reverberated with what his fellow Scotsmen and Irish immigrants had to endure.