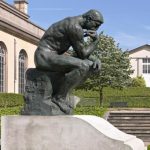 Whether Rodin’s sculpture of “The Thinker” was generic or not, it was a perfect complement to Rene Descartes’ life, legacy and accomplishments.

There is an old joke that pokes fun at Paris’ “Left-Bank” existentialists like Jean Paul Sartre. Sartre was enjoying a cup of espresso at a sidewalk café when the waiter asked him if he would like a refill. Sartre responded, “I think not” and he disappeared!

Of all the scientists, saints, poets and philosophers we studied in the Biodesign Class, Rene Descartes was truly one of my favorites. My admiration for him is not only rooted in what he believed and accomplished, but his revolutionary approach to education. His passion for learning inspired me to press on and collaborate with students in pioneering a one-of-a-kind Biodesign program.

At the age of 18 Descartes experienced a major epiphany that revealed that everything he thought he knew was the result of other men’s thinking. Ergo he vowed: … “never to accept anything for true which I did not clearly know to be such; that is to say, carefully to avoid precipitancy and prejudice, and to comprise nothing more in my judgment than what was presented to my mind so clearly and distinctly as to exclude all ground of doubt.”

Through the daunting process of reeducation, Descartes became a world-famous mathematician, scientist and philosopher. He was arguably the first major philosopher in the modern era to make a serious effort to defeat skepticism. His views about knowledge and certainty, as well as his views about the relationship between mind and body have been very influential over the last three centuries.

He began by questioning his own existence and concluded: “Cogito ergo sum, I think therefore I am.” From that beginning, he went on to reason that art can never exceed the skill of the artist and that the creation cannot be more intelligent than the creator, therefore there must be a more intelligent being than he.

Descartes’ work provided the basis for the calculus developed by Newton and Leibniz, who applied infinitesimal calculus to the tangent line problem, thus permitting the evolution of that branch of modern mathematics. His rule of signs is also a commonly used method to determine the number of positive and negative roots of a polynomial.

Descartes also wrote a response to external world skepticism. He argued that sensory perceptions came to him involuntarily, and are not willed by him. They were external to his senses, and evidence of the existence of something outside of his mind, and thus, an external world. He went on to show that the things in the external world are material by arguing that God would not deceive him as to the ideas that are being transmitted, and that God has given him the “propensity” to believe that such ideas are caused by material things. He gave reasons for thinking that waking thoughts are distinguishable from dreams, and that one’s mind could not have been “hijacked” by an evil demon placing an illusory external world before one’s senses.

“By ‘God’, I understand, a substance which is infinite, independent, supremely intelligent, supremely powerful, and which created both myself and everything else that exists. All these attributes are such that, the more carefully I concentrate on them, the less possible it seems that they could have originated from me alone. So, from what has been said it must be concluded that God necessarily exists.”

Albert Einstein wrote that it is not the immensity of the universe that should command our wonder, but the human brain that can begin to contemplate the immense universe.

In a similar manner, the purpose of studying Rene Descartes was not to inject religion into an advanced biology class, but to consider the thoughts and discoveries of one of the world’s greatest mathematicians, thinkers and philosophers and how he arrived at them. Descartes’ discoveries helped enable Isaac Newton to establish the foundation for modern physics. Einstein regarded Newton as the greatest scientist of all: ergo Descartes was a pivotal player in the evolution of Western Civilization.