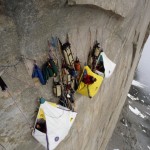 On only two of the 20 Biodesign Classes that got to sleep on top of Yosemite’s famous Half Dome, rock climbers “topped out” the same afternoon we were there. Our students were fascinated by the climbers and went over to the edge to welcome them. I was about 100 yards away, busy with other tasks, but in the cool mountain air their voices could be easily heard. One of the climber’s voice came across the way crystal clear: “Your whole biology class is up here? Far out! Your teacher must have big balls.” I burst out laughing. The phrase was not new to me; I had heard our guys, and a few girls use it, but never directed at me. Although I found it a little crude, I understood young people’s desire to communicate intensity, passion, even spirit, when they found words like “courageous” trite and obsolete.

After all four climbers reached the top they ate a snack, drank some Gatorade and quickly began reorganizing their “haul sacks.” The amount of food, water and climbing gear needed for the 5-day ascent was stunning. They divided the packs evenly, with each one weighing about 60 pounds. We were shocked to discover that they were going to descend the cables and make the 10-mile trek back to Yosemite Valley; the final few miles in the dark. It was hard to imagine a hiker carrying a 60-pound load for a short distance, let alone 10 miles. As they prepared to leave the leader asked me for a favor. The ascent had taken one day longer than planned and, mysteriously, all of their flashlights had dead batteries. He wondered if we could spare a couple flashlights. Our students reacted quickly and each climber was given a light. We told them where our base-camp was and they assured us that they would leave the flashlights there. After they departed, in an uncommon cynical moment, one of our guys snorted, “Any bets we will ever see the flashlights again?”

Later on in the night, the climber gave me pause to reflect and what I discovered was intriguing. In leading the students up the cables to the top of Half Dome, I did not feel that any particular body parts were larger than normal. Translated; I did not feel particularly “courageous.”  I felt more like Sir Edmond Hilary who stated that he climbed Mt. Everest “because it was there.”

And then I experienced yet another Half Dome epiphany.  The young climber was not referring to the courage of climbing a mountain; he was referring to the courage to face our gravest fears. For me, this was not leading a group of students up the cables of Half Dome, it was leading classes on an educational adventure that may have been the only one of its kind in a public high school. We were truly in the spiritual wilderness with no charts or maps and at the mercy of Mother Nature.

Anatole France’s words came to mind. “The rarest courage is the courage of thought.”

Breaking the chains of well-established thought patterns can be as difficult as breaking a well entrenched habit. However, the greatest difficulty is often overcoming the fear of believing something new. Mark Twain understood this perfectly when he wrote:

“It ain’t what you don’t know that gets you into trouble. It’s what you know for sure that just ain’t so.”

The work I was doing could be both threatening and provocative to traditional thought patterns of students, parents, colleagues, administrators and school board members. Although numbers of antagonists were typically small, they could be very vocal. Comments like, “Biodesign is NOT a science class;” “Young is a frustrated preacher;” “What he is doing is not only illegal, but evil,” were whispered, or even expressed verbally. For several years, one school board member did every thing in his power to have the Biodesign Class banned and me fired. When confrontations did occur, I was shaken to the depths of my soul. I had no book or lesson plan to refer to. Aside from my wife, I had no one to confer with to offer guidance, support or encouragement. Of course, I was keenly aware of the perils that Socrates, Jesus and Galileo faced for encouraging people to “break the chains” of their thought patterns. In the end, I had to rely on the wisdom of my support team. Men like Socrates, Aristotle, Galileo, Newton and Einstein. I regarded what I was attempting was “good” and Plato warned me, “if you ever doubt the power of evil, try to do something good and see what happens.”

One of the primary goals of writing Biodesign Out For A Walk was to offer guidance, support and encouragement to teachers, in general, but specifically biology teachers, to “break the chains” of restrictive traditional teaching methods and set their students free. It may be scary at times, but it may also be a matter of a student’s spiritual life or death.

Note: When we returned to our base-camp, all four flashlights were lined up in a row, on a table with a “thank you” note written on a piece of a grocery bag.