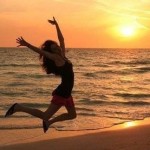 Facebook can be a source of mental pollution, inane noise or clatter; it can also be a vehicle for sharing breathtaking mysteries. This video shared by Giovanna Brimlow-Tuccori is about as close to providing a miracle as you can get through the internet.

Excerpt: Biodesign Out For A Walk, Chap. 26, “Soul Medicine.”

“How many of you guys had to have your mom or dad teach you how to have an erection?” The girls giggled nervously; the guys looked shocked, but quickly broke into laughter. No hands were raised.Rachel raised her hand and said, “My mom is in charge of the imaging laboratory at the hospital, and she performs sonograms. She has a picture of a six-month male fetus playing with his hard little ‘you know what.’”

In his book, “The Lives Of A Cell,” medical doctor/author Lewis Thomas suggests that a single cell is so complex that it is possible that man will never be able to unravel all of its mysteries. He does a beautiful job describing some of the physiological stages of embryonic development and states that because of this we should all live in a daily state of awe and wonder. Furthermore, he offers, if we fully understood the miracle of life, we would live each day congratulating each other in a never-ending state of ecstasy.

Whether conceived in a grass hut, the back of a Chevy, or in the bridal suite of Balmoral Castle, each human results from the union of one out of 600 million sperm cells and one out of 300,000 ovum cells. The numbers are even more staggering when we learn that sexually healthy males generate about 1 billion sperm cells per month and embryonic females contain 7 million egg cells; 300,000 of them typically remain through puberty, and 300-400 will eventually be ovulated. The odds against our being are cosmic which results in each person being a “once-in-a-universe” creation of genetics and environmental stimuli. Little wonder Lewis Thomas thought we should dance the dance of joy for being alive.

Antonio Cano begins his video where we all began; two haploid cells that join into one in an unfathomable process called fertilization. The two cells, now one diploid zygote journey into the uterus and find a suitable place for implantation. The next nine months will be spent in a symbiotic relationship between mother and embryo. e.e. cummings understood this relationship in his verse:

we are so both and oneful

night cannot be so sky

sky cannot be so sunful

i am through you so i

During the embryonic process the zygote eventually divides into 100 trillion cells that differentiate into 11 systems that include many organs, various types of tissue and billions of cells that function as interdependent individuals.

Loren Eiseley understood this concept when he tripped on uneven sidewalk, fell against a building drain pipe and split his forehead. He apologized to his red blood cells as they dripped onto the concrete. He was being facetious of course, knowing full well that red blood cells have a short lifespan and all of them would have been replaced in 4-6 weeks.

All of this creates several awesome/ awful questions for humans to contemplate.

1. Is every human being merely the result of a soul-less accidental accumulation of organic molecules?

2. Is each person predestined to live as an automaton, in a manner similar to a witless, finely crafted watch?

3. Do humans actually have free will and share in the process of striving for full personhood?

4. Is it possible that each human has been physically and symbolically created in the metaphorical image of a Supreme Being?

It seems clear that if man does not have free will, than the answers to these questions are irrelevant and unnecessary. If, however, each human has been conceived with free will, then his answers will have a profound impact on the quality and direction of his life.

Albert Einstein never saw a video like this one; however, he practiced the art of celebrating mystery:

“The most beautiful thing we can experience is the mysterious. It is the source of all true art and all science. He to whom this emotion is a stranger, who can no longer pause to wonder and stand rapt in awe, is as good as dead: his eyes are closed.”