Being a teenager is hard.  Growing up at Lake Berryessa and going to school in St. Helena sometimes seemed like looking through a window at another world that I was neither familiar with nor part of.  The daily life of someone that lived in St. Helena was so much different than mine that I often felt like an alien in another world.  In the winter of 1995, our Bio Design class took a trip to one of the 7 wonders of the world, The Grand Canyon.  At that time my life was in turmoil and I was being pulled in several directions, both physically and spiritually.  On our first morning in the Grand Canyon, I awoke before dawn and walked out to the side of the rim.  I sat and waited for the show to begin.  It didn’t take long and I saw the most amazing colors and shadows appear as the sun arose over The Canyon walls.  The colors were brilliant, and to this day are the most beautiful thing I have ever seen. Watching The Canyon light up is truly amazing.
At one point, I felt so mesmerized that I became overwhelmed.  Thoughts questioning my own mortality crept into my mind and the countless pressures that had been on my shoulders for the last few months seemed to be burying me.  Suddenly I realized I was standing on the edge of this natural wonder and I was considering jumping off.  It seemed, for a moment, like it would be so graceful and beautiful.  My body would be free, my mind at ease, and I would soar down in flight.  Then I heard the call of a bird and it snapped me back to reality.  I took a few steps back and thought about what might really happen.  My selfishness would certainly cost the Biodesign Class its future trips and probably the class itself.  I would ruin countless family vacations and my family would probably have never even known that I was as lost as I was.  I came to my senses and walked back to my hotel room to get ready for the days ahead.
It was on our hike out of The Canyon that another unforgettable event took place.  I was worried that I was going to be going too slow so I decided that I would try to get in front of the front 2/3 of the class and keep that pace.  When we stopped for lunch, I think it was at Indian Gardens, I only stopped for about 10 minutes before I began again.  I surprised myself by the pace that I was able to keep by simply focusing on the environment around me.  However, about a mile from the top, something very odd happened.  I hit a wall.  Not literally of course, but I was pooped out.  I literally lost all energy and, what was worse, I was completely 100% out of water.
I was in one of those long switch backs that would go on forever.  From what I remember, it seemed like I could see about 75 yards in each direction on the trail.  I sat down on the side of the trail and thought I would wait for one of our group to come along and maybe bum a little water.  Ten or fifteen minutes went buy and I didn’t see anyone. I really began to feel a sense of urgency and I got worried.  I felt awful and I began to wonder if I were going to make it out of The Canyon.  I began thinking of what transpired the first morning and was scared.  Suddenly, a man appeared next to me.  I say appeared because I could see a great distance up and down the trail and I never saw him coming.  He immediately asked me if I would like some water and I eagerly said yes.  I remember him handing me a large bottle of water.  I saw condensation on the outside, like a bottle would have if it were inside of an ice-filled cooler.  I immediately began drinking, and probably drank about half of the bottle.  I looked up to thank the man and he was gone!  There was literally no one there!  I was so shocked I looked back into my hand to make sure I was really holding a bottle of water.  I was!  That’s when I realized that the bottle of water was so cold, and had condensation on it.  I looked up and down the trail and there was no one in sight.  I looked over the edge and there was nobody in sight either.
I started walking again, debating whether or not to tell the class about it.  I’m fairly certain I decided not to.  I remember when I finally came out of The Canyon; Christie was standing there waiting for us.  I paused briefly and considered telling her, but decided not to.  16 years later, both events are still fresh in my mind.  I know it sounds crazy, but I really think I saw an Angel that day.  That Angel watched over me as I stood on the side of the rim, and then he delivered a bottle of water to me when I needed it.  It was a life-changing event, one that has had an impact on every day that followed. 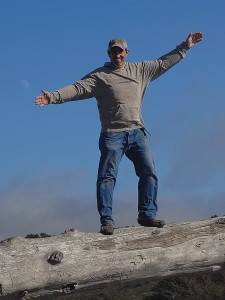 I recently completed the first (and only) revision of Biodesign Out For a Walk. A dozen errors – give or take – were corrected. Geoff Martin (’92) identified
several paragraphs that “needed more scaffolding,” including the ending.

During the whole process of editing, I sadly realized that I neglected crediting Mark Salvestrin for his amazing support. The lunar eclipse photo that Mark shot and Chris Fowler posted on the BOFAW Facebook page made my omission apparent. There was a perfect place for “Mark” in chapter 24.

If you have already purchased the book, you can read “Mark” here.  New readers can purchase the revised edition of Biodesign Out For a Walk on Amazon and Outskirts Press. 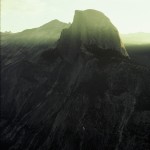 The St. Helena Star is the weekly newspaper for, well, you guessed it – St. Helena, California.  I was extremely honored when Doug Ernst, the Publisher/Editor, decided not only to read Biodesign Out For A Walk, but to publish a review.  And did I mention I was nervous that he was going to publish a review?  But it turns out I had nothing to fear.  Doug wrote a beautiful review that tells me he “got it.”

He “got” what the Biodesign class was about, and more importantly, he “got” that the book is less about me and more about the 700+ teenagers who had the courage to embark on a physical, mental and spiritual journey while studying advanced biology in high school.  If you want to see for yourself, follow this link to read Doug’s review.  Thanks, Doug!

Welcome to the Biodesign Out For A Walk website.  The Reflections page is a place where I’ll share updates about the book (coming soon!) and encourage responses from readers.