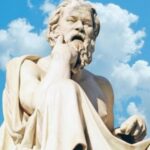 I suspect that this is one of Socrates’ most commonly misunderstood quotes. When I posted it in the bio lab, it usually sparked lively discussions. It was not uncommon for a student to quip, “If this is so, then why bother?”

The answer was that Socrates was not saying that knowledge wasn’t important, quite the contrary. He was saying that the more he learned, the more his sense of mystery, awe and wonder of the Universe grew.

This thought emerged when I watched the intriguing Nature Conservancy video on water striders produced by entomologist Matt Miller.

Water striders are common residents of ponds, streams and marshes throughout Europe and North America. There are about 1700 known species and some live in ocean ecosystems. To the casual observer, striders are interesting because they are among the few animals that can walk on water, ergo; Jesus Bugs. Few observers, however, can even begin to comprehend just what they are seeing, especially if the insects are mating.

Firstly, every strider is made up of approximately 500 million cells. Each cell is made up of 20 trillion atoms, which is 100X the number of stars in the Milky Way Galaxy. All of these trillions of atoms have to be organized to perfection in order for the strider to survive. The atoms are arranged into molecules, cells, tissues, organs and at least 10 systems that allow the animal to eat, breath, excrete waste and reproduce. 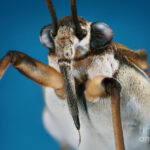 However, the overarching Socratic question is, “What do these animals know?” Or, more precisely, what level of consciousness and or free will do they possess? Are the striders totally preprogrammed by the mostly unknown phenomenon called instinct? If so, what is the origin of the controlling organizational force? Biologists have made huge strides in describing the role of DNA in creating biological structures, however, almost nothing has been discovered as to how DNA can be pre-programed to organize perhaps terabytes or exabytes of incoming sensory impulses necessary for behavioral activities. This astronomical amount of information must be processed, and decisions must be made in order to direct another astronomical number of motor responses necessary for the striders to survive.

Although most biological functions are done independently, mating greatly complicates the task because two animals are involved.  Miller explains some of the rudiments of the mating act, however, he does not approach the mystery of what (if any) consciousness the insects possess. Furthermore, he implies that, during mating, the female is forced into submission due to fear of being eaten, however, it is well known that striders secret a pheromone that serves as a repellant to predators.  Fish will typically only eat striders to avoid starvation. 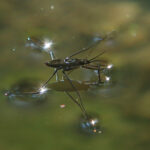 Other accounts indicate that, by tapping her legs on the water, the female can communicate at least three different messages, including her intention to mate.  Having done this, she removes her prophylactic shield and allows mating to occur. Does this mean that she can make a judgment about the genetic fitness of her mate; which would better guarantee the success of her offspring?

And of course the two greatest questions are:

Are the water striders, with all of their complex and wondrous structures and functional behavior, totally unaware automatons that evolved through a process of random chance and competition?” Or perhaps, paraphrasing anthropologist Loren Eiseley, the striders are the result of, “the eternal mystery, the careful finger of God.” 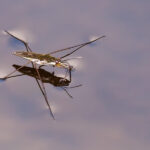 In either case, far more questions than answers remain about water striders. Socrates would have celebrated the mystery and joyfully proclaimed: