When I decided to follow John Muir into the mountain wilderness, I was naively unaware that the closer I got to his living spirit, the greater the risk of experiencing one of his near-death events. When I decided to encourage groups of 30 students to follow his footsteps, my naiveté increased along with the risks.

Recently, ex-Biodesigner, Karen Amick Buscher indicated that she was about to join our caravan of retro-hikers, time-traveling back in search of the roots and branches of the Biodesign program. What she did not know was that she triggered an eerie coincidence that connected Gibran’s quote:

“Out of suffering have emerged the strongest souls; the most massive characters are seared with scars,” to an event that happened in the Class of ‘76, that ranked at or near the top of the list of the most terrifying events in Biodesign history. 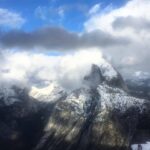 The Class began the 10-mile ascent of Half Dome at 7:00 AM, at the Yosemite Stables, with fully loaded backpacks. They labored up The Mist Trail and arrived at Little Yosemite Valley about 1:00 PM for a lunch break. All the while the clouds were thickening as snow flurries had been predicted. Two hours later and a thousand feet higher it began to snow. We decided to make a primitive campsite on a wide opening in the trail. Many of the hikers were exhausted and were relieved to be able to rest. However, about half of the hikers were athletically inclined and pleaded for me to dodge the flurries and hopefully arrive at the top of Half Dome.

If I were born in Africa, I would have said, “God is playing with us” as we played a cat-and-mouse-game up the trail. It would start to snow and we would stop; it would stop snowing and we would start. When we reached the famous stairway, we would take two steps up and stop in the snow. Half way up, it really began to snow and we were forced to turn back. We slipped and slid over treacherous stairs until we reached the bottom and saw a blood-curdling sight. The snow had totally obliterated the trail; the light was fading and we were lost. The gravity of our peril was nearly overwhelming. In my mind’s eye I saw the headlines of our local newspaper: 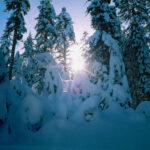 However, after a few panic-stricken moments, my mental fog abated and I took two or three students on a recon mission, hoping to find the trail. The rest agreed to stay put until we returned. We followed the natural declination of the mountain to where we thought the trail should be. Fortunately, within several hundred yards we found a trail marker in the snow. Depending on the reader, our deliverance could have been due to chance, dumb luck or Divine guidance. John Muir would have credited the third option. 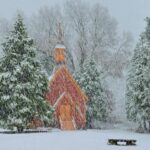 As we descended, the snow thinned out and the trail became clearly visible. We returned to Classmates who were understandably anxious about our well-being and although we were grateful, we were too shaken for any celebration.

Although we were disappointed about not topping out at Half Dome, we were grateful to be alive and gladly returned to our base-camp on The Valley floor. That night our sleeping bags were exceptionally warm and comforting, in sharp contrast to the horrifying experience on Half Dome; joy and terror flowing from the same cup. 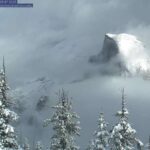 For many nights after the trip I awakened with the recurring nightmare of the vision I saw on the trail up Half Dome. Over all these years I sincerely hope Gibran was correct:

“Out of suffering have emerged the strongest souls; the most massive characters are seared with scars.”

Were it not for Karen, this daunting story would not likely have been told. Strangely, it did not occur to me while I was writing BOFAW. I don’t know if I blocked it out because it was too scary to write or that I was too embarrassed for foolishly leading students into harms way. Christie reminds me occasionally that John Muir only had himself to be responsible for; my situation was quite different. There were some parents, colleagues and administrators who though that I was a bit of a “wildman.” If so, it was a wonder that any parents entrusted their precious children into my care.

However, over a 24-year period and 63 trips into the wilderness, the only significant injury was a broken pinkie-finger caused by too many girls trying to squeeze into two bathroom stalls at McDonald’s Restaurant in Oakdale, Ca.

Invoking the Spirit of John Muir, I can only conclude that, “Only by the Grace of God” did we all survive to tell the tale.