According to Edwin Way Teal (editor: The Wilderness World of John Muir) Muir was a scientist, a poet, a mystic, a philosopher and a humorist. The mystic in him wrote: “No sane man in the hands of Nature can doubt the doubleness of his life. Soul and body receive separate nourishment and separate exercise, and speedily reach a stage of development wherein each is easily apart from the other.” John Of The Mountains. 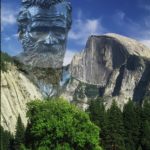 Whether Muir was aware of 13-th century German philosopher/theologian Meister Eckhart or not, they had much in common. Like Muir, Eckhart was criticized for his visionary thinking. His teachings had a huge impact on contemporary theologian Matthew Fox, who envisioned the modern movement known as “Creation Spirituality,” a concept that formed the basis of Muir’s “theology.”

“It is the nature of a word to reveal what is hidden. The word that is hidden still sparkles in the darkness and whispers in the silence. It entices us to pursue it and to yearn and sigh after it. For it wishes to reveal to us something about God.”

The human struggle to unravel the mysticism of Nature has challenged scientists, sages, poets and prophets for thousands of years. Muir’s contemporary and fellow transcendentalist R-W Emerson wrote:

“The whole of nature is a metaphor of the human mind.”

“No one has ever successfully painted or photographed a redwood tree. The feeling they produce is not transferable. From them comes silence and awe. It’s not only their unbelievable stature, nor the color which seems to shift and vary under your eyes, no, they are not like any trees we know; they are ambassadors from another time.” ~John Steinbeck, Travels with Charley In Search of America, 1962.

About the same time Muir was exploring the Sierra Nevada (with 2 trips to Alaska) fellow mystic/naturalist, John Wesley Powell became the first known human to successfully navigate the Colorado River through the Grand Canyon. After a 3-month perilous journey he emerged to write:

And in a “Neo-science” era, when scientists were swapping God for Darwin, anthropologist Loren Eiseley challenged the movement by claiming the Mystery still exists. He correctly pointed out that scientists dismissed the “Creation Story” as an unprovable myth, only to replace it with the “Big Bang Theory” which is equally unprovable. Not only that, in order to accept the Big Bang Theory they have to reject the long-standing law of conservation of matter/energy. Matter can neither be created nor destroyed. If matter cannot be created, the Big Bang Theory is a myth. If it can be created, it must have been created out of nothing, which is scientifically impossible. This is classic circular logic and intellectually flawed.

There is a legendary story that on his deathbed, Albert Einstein smiled and mused, “But I still wonder how nothing can become something.”

Eiseley ends his masterpiece book, “The Immense Journey” with a profound summation:

“Rather, I would say that if “dead matter” has reared up this curious landscape of fiddling crickets, song sparrows, and wondering men, it must be plain even to the most devoted materialist that the matter of what he speaks contains amazing, if not dreadful powers, and may not impossibly be as Hardy has suggested, “but one mask of many worn by the Great Face behind.’” 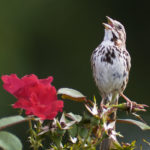 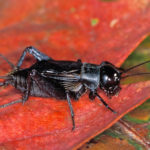