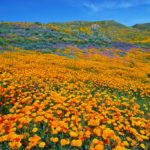 There are religious scholars who believe that John Muir was sent as God’s messenger to interpret and describe the wonders and miracles of the wilderness. Conversely, there are secular scientists who assert that his life is a testament of the unlimited creativity of random genetic combinations without involvement with a Supreme Being. However, what they may agree on is that his life appears to be a huge synchronicity that resulted in his “thoughts and deeds that have moved the world.” (JM) In fact, his life was filled with so many synchronicities that they are too numerous to count. Muir seems to have had a gift for being at the right place at the right time. Perhaps he was aware that Louis Pasteur opined, “Chance favors the prepared mind,” as he was passionate and dedicated with his endless plans to explore the mysteries and revelations of Nature.

“The world is big and I want to have a good look at it before it gets dark.” JM

One of these events involved his first walk from San Francisco to Yosemite Valley. He arrived in the spring and walked south along the Coast Range and ascended Pacheco Pass. His first view of the California’s Central Valley was a view that stirred his soul.

Excerpt: “The Mountains of California.” JM

“The Great Central Plain of California, during the months of March, April and May, was one smooth, continuous bed of honey bloom, so marvelously rich that, in walking one end to the other, a distance of more than four hundred miles, your foot would press about a hundred flowers at every step…

When I first saw this central garden, the most extensive and regular of all the bee pastures of the State, it seemed all one sheet of plant gold, hazy and vanishing in the distant, distinct as a new map of the foothills at my feet…

Sauntering in any direction, hundreds of these happy sun-plants brushed against my feet at every step, and closed over them as if I were wading in liquid gold.” He wrote elsewhere, “ Only God can paint with flowers.”

Nearly every square foot of California’s Great Central Valley, from Mt. Shasta in the north and Mt. Whitney in the south, has been “repurposed” to accommodate human habitation. Fortunately, some of the lower foothills have escaped the destructive power of devotees of “progress.” Because of the atypically high rainfall this year, California is experiencing a rare explosion of wildflower life. It is a poignant reminder of what John Muir saw on his first walk from San Francisco to Yosemite Valley. Although impressive, this walk was only one of thousands of walks that contributed to the larger-than-life legendary John Muir.