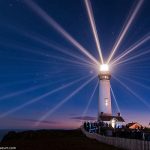 “Let the little children come to me, and do not hinder them, for the kingdom of Heaven belongs to such as these.” Matt. 19:14

When our four children were small, each year the best Christmas gift that they gave to my wife and me didn’t cost them a penny. It was offered freely and eagerly as they sang the children’s hymn, “This Little Light Of Mine,” during one of the Advent-Sunday church services. Each performance varied depending on the teacher and children in the choir, but that did not alter the poignancy of the event. One teacher taught the children the American Sign Language signs for the words to enhance the process of communion (intimate fellowship or rapport).

Whether by the combination of lyrics, melody and hand-signs, or some mysterious indwelling of spirit, the song never failed to magically light up the church and raise the spirits of the parishioners.

Each face shone like a heavenly cherub; each voice exulted with joy. Their eyes sparkled and danced and revealed that they understood that they were doing something extraordinary and were eager to share.

These were otherwise normal kids capable of being bratty, selfish and naughty, however, while they were singing “Little Light” they transcended typical childish behavior.

Their faces radiated the purity of innocence. In the moment, they were not corrupted by fear, doubt or cynicism. They had no idea of what metaphors were, but that didn’t matter. They were not like lights, they were living lights and each beacon of love was palpable.

Sadly, like little Jackie Paper, of “Puff The Magic Dragon” fame, by the ages of 8-10 children are usually no longer interested in singing in a children’s choir. During their teens they often become too sophisticated to indulge in childhood songs.

Typically, this spiritual regression continues into adulthood where most adults lose all interest or ability to see themselves as “little lights that shine.”

Just in case you have never heard the song, or you are open to a little Christmas cheer, I have attached a video of The Soweto Gospel Choir. These African adults are not too shy, jaded or prideful to launch themselves into the spirit of Christmas:

It is intriguing to wonder if John Muir sang “This Little Light Of Mine” with his beloved daughters Helen and Wanda. However it has been authenticated that he thoroughly enjoyed taking them outside each night to contemplate [make a temple with] the stars before their bedtime. Based on his numerous expository themes on Nature, it would be easy to connect the dots and infer that he saw his daughters as stars, “glorious sparks of the Divine:” Little lights that were destined to shine.