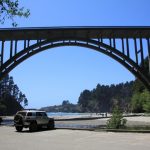 In an increasingly secular society, it is intriguing to wonder how people respond to Pierre Chardin’s observation:

Do they agree or disagree? Are they shocked, offended or inspired?

Dr. Albert Schweitzer must have agreed by suggesting that many people are naively unaware of the depth and scope involving human spirituality. World-renown anthropologist Loren Eiseley likened the spiritual path of humans to a journey:

“The journey is immense, difficult, at times impossible, yet that will not deter some of us from attempting it.”

Henry Thoreau described the human experience as, “sauntering towards the Holy Land.”

Whether she knew it or not, all of these factors converged in the mind of a high school senior in the Biodesign Class at St. Helena High School.

Cindy was a large-framed-girl who suffered from debilitating bouts with acute asthma that could be triggered by even moderate physical exercise. Understandably she was not keen on hiking. These facts underscore the courage that she mustered by attempting to hike from Yosemite Valley to the top of Half Dome, in one day, with a full backpack. The hike is 10 miles long with a 5,000 ft. rise and considered challenging for seasoned backpackers.

Her epic journey is detailed in Biodesign Out For A Walk, but it took her 14 hours of exhausting labor to reach the top. Against all rational odds, she refused to be denied.

She later described her ordeal as a transcending experience, however, it failed to move her into an awareness of the God that she felt John Muir described. I was not aware of the fact, but this doubt haunted her for the next 5 months until The Biodesign Class traveled to the Mendocino Coast. Our goals were to explore plant and animal communities as well as the ethos of the area.

A typical day involved exploring various ecosystems and visiting local residents who lived in harmony with Nature. After dinner, the students sat in a circle around a campfire, sang traditional folk songs and shared reflections from their journals. We were more concerned with macro-ecological and experiential perspectives than memorizing minutiae.

On the last evening of Cindy’s trip, she approached me as I was preparing the campfire. In spite of all the wonders she had seen, she was in a melancholic mood and shared her frustration with not being able to connect with her Higher Power. I suggested that spiritual guidance was not in my job description and that she might want to seek advice from a local priest or pastor when we returned home. However, on a whim, I surprised myself by asking her if she had asked “The Great Mystery” if He/She existed. I didn’t think I was violating the law that separates Church and State. Understandably she looked puzzled and left me to my fire preparation.

With about 35 students and chaperones sitting around the fire, I did not realize that Cindy was missing. When all the journal sharings were done and the last song had been sung, students drifted off to their tents or down to the beach.

I was busy securing the “chuck wagon” when Cindy suddenly appeared. She was wearing a huge smile and her melancholic mood had transformed into a radiant aura. She looked like she had a huge secret and blurted out, “I have something to show you!” Then she quickly grabbed my arm and hurried me along a trail into the woods. About 100 feet out she stopped abruptly, giggled and asked, “Are you ready?”

I had no idea of what I was supposed to be ready for, but gamely said, “Go for it.” She handed me her flashlight and instructed me to shine it on her hands. I followed her instructions and in a flash I was like a “deer in the headlights.” My palms got clammy and my knees knocked together uncontrollably. What I was seeing were two very delicate palms, each with a ½ inch bright red spot seemingly tattooed in the middle. They were about as normal as flying pigs and I had no idea of what they were or what to say.

When I finally partially regained my senses, she giggled again and said, “They’re pretty cool, don’t you think?” I tried to respond but my brain could not process what my eyes were seeing and my mouth would not form words. I think I made a senseless guttural sound.

She was obviously enjoying the moment and offered further: “They were hot at first, but they have cooled down now, would you like to touch them?” I was totally befogged, but some primal guidance factor indicated that it would be highly inappropriate for me to touch her palms. The truth is, however, her suggestion was terrifying and I wanted to escape back to camp. There was nothing in my six years of university education (including a Masters degree in teaching biology) that prepared me for this event. I pondered whether the spots were physical, mental or spiritual; real, imaginary or symbolic and got no resolution.

After that, there is a blank space in my memory. I don’t remember going back to camp or crawling into my sleeping bag. I do remember a dream involving a debate between my right and left brain. I was excited about Cindy’s discovery (what ever it was), however, I feared that if news of the event made it back to school administrators or the school board, I would be fired immediately.

Fortunately, the events of the next morning quickly removed any fear that Cindy’s secret would become public knowledge. I got up early and began rousting the breakfast crew. Cindy bounded out of her tent, rushed over to me, boldly displayed her palms and blurted out, “look mom, no spots!” The comic relief was perfect and she followed it with one of the most wonderful hugs I have ever received.

Loren Eiseley spent much of his life exploring and describing the beauty and wonders of Mother Nature. His countless epiphanies enabled him to stay connected with his Higher Power. Perhaps, because of this, he typically avoided reducing his multitude of synchronicities to a three-letter-word. Instead, he preferred the more expansive term, “The Great Mystery.” In fact, the overarching theme in all 11 of his books is Mystery. In spite of man’s greatest achievements, the answers to the big questions of life and the universe remain veiled. Mystery reigns supreme.

I can’t think of anything more wonderfully mysterious (or scary) than a curious girl walking into the Mendocino woods and emerging with two bright red spots on her palms.