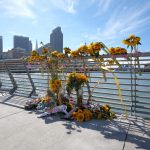 In 1976, naturalist T. H. Watkins published, John Muir’s America. He must have felt that he knew Muir’s soul so well that he composed three imaginary conversations with the venerable old mountain man. The first dialogue began on the veranda of Muir’s home in Martinez, Ca. The two men discussed many ecological topics as they wandered up to Muir’s “scribble den.” After discussing some of his inventions, Muir rocked back in his chair and closed his eyes until Watkins innocently wandered into the controversial role that Thomas Huxley played in popularizing Charles Darwin’s theory of evolution.

“The old man exploded out of his silence, thrusted forward in his chair and slapped the flat of his palm on the desk top.”

‘Huxley—that bloodless coof! That fool! He and his kind took the work of Darwin and twisted it to fit their vision of the world. And damme, what a cold and heartless world they would have had it be. They called it survival of the fittest, but no matter what they might have called it, was a damnable theory, a dark and chilly reasoning that chance and competition accounted for all things. Oh it was a useful theory—that I canna deny. It justified all manner of cruelty just as my father’s piety excused all manner of cruelty to his children. Should a man be inspired to destroy his best friend in the marketplace, why, he could shrug it off as the natural consequence of living in the great soulless machine of the cosmos. But it was a damnable theory because it ignored the one real truth of the world, the truth that lives in every rock, flower, leaf, tree and animal—including man: it was all created by a loving God, and His love covers all the earth as the sky covers it, and fills it in every pore.’

Forty years later, Watkins’ words have become a fulfilled prophecy. On July 1, 2015, an undocumented immigrant discharged an illegally obtained handgun that resulted in the death of a young woman who was out for a walk in San Francisco. The trial was recently concluded with the jury rendering a verdict of not guilty.

Contrary to all the blather from media pundits, politicians and lawyers, the jury’s acquittal of the alleged criminal had less to do with ethnicity, immigration status or birth-origin, and more to do with socio-cultural, regressive de-evolution in an increasingly soulless society.

The positive proof of this emerged from the fact that in spite of the perpetrator admitting (KGO TV interview) that he pulled the trigger of the lethal weapon, the jury agreed with a scenario that the defense team presented as they “twisted it to fit their vision of the world.”

Tragically, events like these are going to become more common. In the name of “political correctness,” our public el-hi schools, colleges and universities are systematically sanitizing curricula, removing all references to spirituality. This will doubtlessly produce generations of morally bankrupt adults who are proponents of the Godless religion known as “situational ethics.”

Some of the fruits from this evil tree were recently borne for all to see in the San Francisco courthouse.

Of all the countless millions of words generated by this tragedy, two lines stand out. The day after the verdict was announced, the headline of a SF Chronicle editorial:

“Justice was not served.”

And one of the jurors anonymously commented; “I need to spend some time collecting my thoughts.”

Indeed, don’t we all?

In his classic book, Religions, Values and Peak Experiences, psychologist Abraham Maslow expressed concern for an increasingly spiritless US society. He suggested that the subject of “human spirituality” could be added to a suitably enlarged biology curriculum without breaching the wall that separates Church and State.