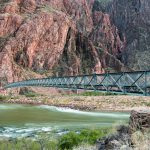 “This follows from the extreme difficulty or rather impossibility of conceiving this wonderful universe, including man with his capacity of looking far backwards and far into futurity, as the result of blind chance or necessity. When thus reflecting I feel compelled to look to a First Cause having an intelligent mind in some degree analogous to that of man; and I deserve to be called a Theist.” Charles Darwin

Fifteen Biodesign Classes were blessed with the privilege of walking across the “Silver Bridge,” which connects Grand Canyon’s South Rim to Phantom Ranch. They enjoyed watching the Colorado River flow beneath the grated deck they were walking on. The same cannot be said about mules. Mules refuse to cross the bridge because the flowing river below spooks them. People may scoff at their behavior until they realize that they are just as prone to be spooked by spiritual wisdom or events that eclipse their limited mental capacity.

“They distrust, it would seem, all shapes and thoughts but their own.” Loren Eiseley.

Grand Canyon is a wonderfully real and symbolic enigma for man. In addition to its mind-boggling immensity, breathtaking beauty and infinite array of kaleidoscopic colors, it is the greatest page of biological history on planet Earth. There is nothing on Earth that it can be compared to. Simply put, it is too big for people to wrap their minds around.

While watching the water flow beneath their feet, students often struggled in vain to comprehend the fact that the water has been flowing for 1.8 bil’li-yon years (Carl Sagan intonation). Walking along the bottom of Grand Canyon was typically an intensely humbling experience, which often left students with a wonderful hodgepodge of feelings of awe, trepidation and delight. But mostly they expressed an overarching feeling of gratitude for the privilege of being alive at that moment in time. Loren Eiseley expressed a similar emotional awakening on one of his trips into canyon country: “It was a great day to be alive!”

They looked and pondered, looked some more and pondered, but there was no resolution. Little wonder Carl Sandberg wrote; “There goes God with an army of banners” and follows with “who is God and why? Who am I and why?”

As for the mules; their behavior is heavily influenced by instinct, which does not allow for coping with moving water 50 feet below their hooves. Humans however, have been endowed with the gift of “free will,” which includes freedom of thought. However, this freedom also allows for egoism, arrogance and the foolish misassumption that man is smarter that the Creator that fashioned him.